What’s the earthquake risk in your neighborhood?

Is your home or business located on a flood plain? 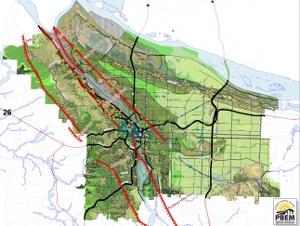 To find out the answers to these questions and more, check out the new maps created by the Portland Bureau of Emergency Management (PBEM). The maps – made in partnership with Portland’s neighborhood coalition offices – identify natural hazards throughout the city. They offer a neighborhood coalition by neighborhood coalition account of known earthquake faults, flood plains and other dangers, including hazardous material sites, steep slopes and forested areas at risk of fire. The maps also show community resources – such as evacuation routes and key transportation corridors used during emergencies, hospitals, county clinics, schools, fire stations and police facilities – within each neighborhood coalition area.

Each map can be downloaded directly from PBEM’s website www.portlandoregon.gov/pbem. Larger versions are available for viewing in person at the following seven neighborhood coalition offices:

The maps were created by compiling information from a variety of existing sources, including data from the U.S. Geological Survey, Federal Emergency Management Agency and Oregon Department of Geology and Mineral Industries. Have a comment about the maps? Tell PBEM what you think at http://www.portlandonline.com/oem/index.cfm?c=53979.

Information reprinted with approval from PBEM.

Thank you for providing this information. Can you put a better link to the Natural Hazards map please?
While it was useful to browse the Portland Bureau of Emergency Management website, I never was able to find that map. The closest I got was this set of 16 maps.
https://www.portlandoregon.gov/pbem/article/585476

Again, useful, but was hoping for a combined map.