May 22, 2012 -- Last Thursday, Friday, and Saturday Portland Fire & Rescue (PF&R) participated in the 20th annual Women in Trades Career Fair.  The Fair is the largest non-traditional career fair of its kind.  Oregon Tradeswomen Inc. produces the interactive three day fair with the hopes of increasing the overall number of women working in the trades. 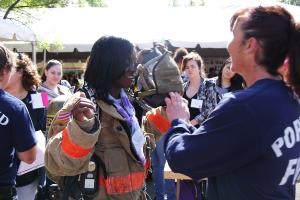 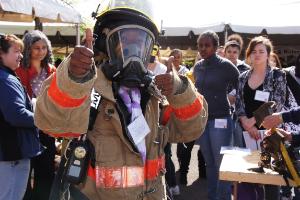 The students who participated in the Fair received hands-on exposure to such professions as welding, roofing, electrical work, firefighting, painting, plumbing, and many more. 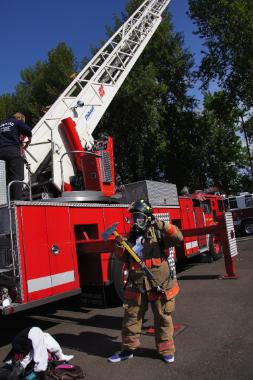 Portland Fire & Rescue teamed up with Tualatin Valley Fire & Rescue to provide a station where students could climb the aerial ladder, suit up in turnout gear, and use a fire hose to knock down cones.  The students who participated were also shown the medical equipment fire crews use on a daily basis, and some of the skills that are associated with using that equipment. 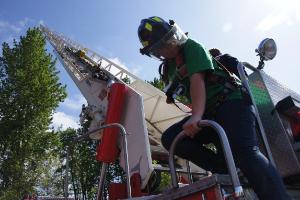 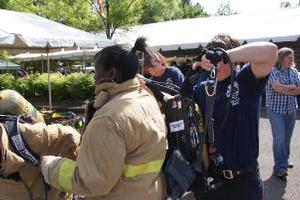 Gretchen, a Portland Firefighter, was a presenter at the fire and emergency services booth.  She noted that, “It was great to act as a role model for young girls and show them what firefighting is all about.” Gretchen also went on to say that “the girls were very enthusiastic to try on the fire gear and climb the aerial, even though the SCBA (Self-Contained Breathing Apparatus) was a lot heavier than they expected.” 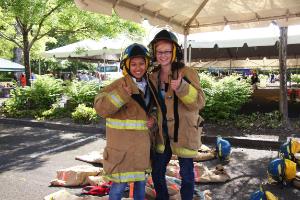 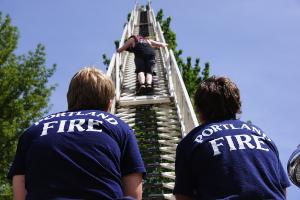 Overall, PF&R’s involvement in the Women in Trades Career Fair was a positive experience for the students involved and the firefighters as well.  The partnership that PF&R has with the Trades Fair is one that will continue on for many more years so more young women can be exposed to the profession of firefighting.