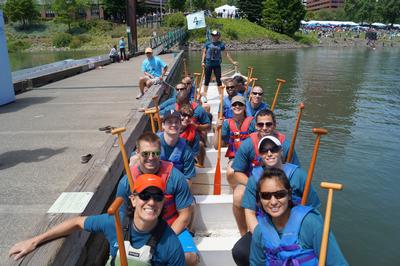 On Sunday, June 10th, Portland Fire & Rescue (PF&R) participated in the annual Rose Festival Dragon Boat Races.  The Portland Kaohsinng Sister City Association (PKSCA) approached PF&R to participate in a special heat called the Wounded Warriors Race.  A team of 16 PF&R members with three outside volunteers competed against a team from the Coast Guard in a single heat where the winner would take all.

After only one practice lasting an hour, and much anticipation once race day finally arrived, the Coast Guard gave all they had but couldn't fend off Portland Fire.  The race, which lasted only a few minutes, had the PF&R team flag holder leaning to a convincing victory of over a third of a boat length.  The PKSCA hopes to have the Navy andPortland Police compete next year so the Wounded Warrior Race can have multiple heats and even more bragging rights. 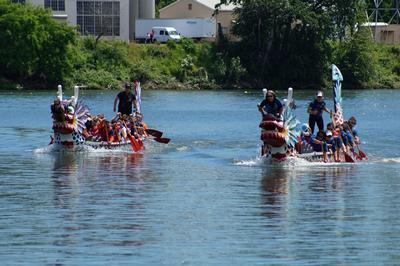 As a generous bonus, the PKSCA will donate $100.00 to the scholarship foundation of the participating teams' choice.  Thank you again to the PKSCA for creating this fun event and inviting PF&R to participate.