On Friday, June 15th, Portland Fire & Rescue (PF&R) Engine 31 (Rockwood) organized a multi-company drill with PF&R Engine and Truck 7 (Mill Park), Chief 3, Chief 103, Gresham Engine 74, and regional partner Life Flight.  The drill covered everything from how to activate Life Flight, communicate with the flight crew, establishing a landing zone, patient loading, and the many safety issues involved with overall operations when Life Flight is on scene.

The Captain at Station 31 felt that although the utilization of Life Flight might not be as frequent as other resources we use in the City of Portland, it is an important resource that needs to be fresh in the minds of crews.  The Fire Management Area that Station 31 and the other fire stations involved in the drill respond in, have a higher percentage of trauma entries into the Emergency Medical System. 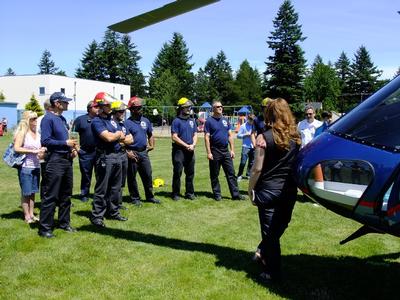 Before the drill began a refresher was given to all crews on general information about Life Flight, and their standard operating procedures.  After the review, a helicopter from Life Flight landed at Alder Elementary School where the crews involved had to set up a landing zone.  Once the helicopter landed, the fire crews practiced doing a “hot” load of a patient, meaning that the rotor blades and the helicopter itself stay on while the patient is loaded into the helicopter.  Many safety concerns were discussed such as not approaching the helicopter alone, waiting until ordered by the pilot, and always keeping within the 180 degree view of the pilot at all times.  Even extreme situations were touched on like what to do if the helicopter were to crash and the best way for the fire department to react in that situation with the available resources on scene. 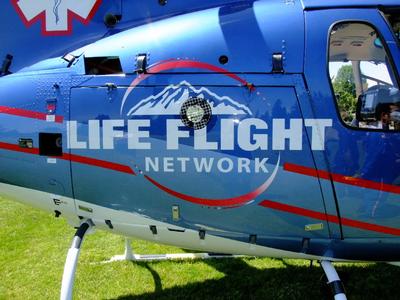