The 4th of July is a time of excitement and fun as we celebrate our nation’s independence.  As you plan your celebration for the Fourth, PF&R urges citizens to think about the consequences of using illegal fireworks.  Instead, use legal fireworks or leave the big fireworks to the professionals and consider visiting one of the many professional fireworks displays in the area.

Both Police Chief Mike Reese and Fire Chief Erin Janssens have joined forces to increase awareness, education, and enforcement during the upcoming holiday in an effort to keep the community safe from the consequences of illegal fireworks. These include economic loss, injuries, stress and anxiety to war veterans, pets, and children, and pollution.  New this year, all Portland Police Officers are deputized to write fire code citiations to those caught in possession of illegal fireworks; citations can cost up to $1,000. 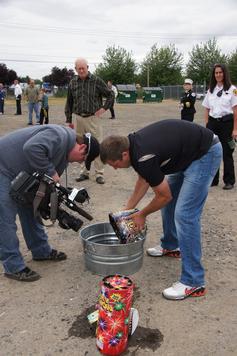 During a demonstration, sponsors explained that Oregon's fireworks law that prohibits fireworks that travel more six feet on the ground or 12 inches in the air, and showed some legal works that families can buy at retail stands around Oregon. The demonstration further emphasized the importance of making sure that fireworks are completely extinguished after use by placing them in a bucket of water to prevent any flare-ups.

Concluding the press conference, Multnomah County Animal Shelter's Chuck Poetz, stated in an interview with KOIN TV that up to 25% more lost pets end up in area shelters during the time around the Fourth of July.  Remember to keep your pets safely inside during the Fourth of July since the explosion of fireworks can be terrifying to them and cause many to run away and become lost. 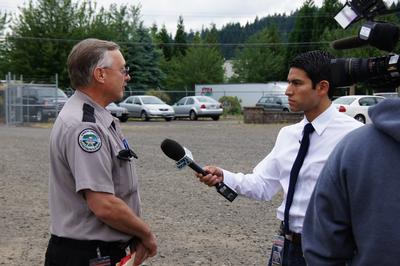