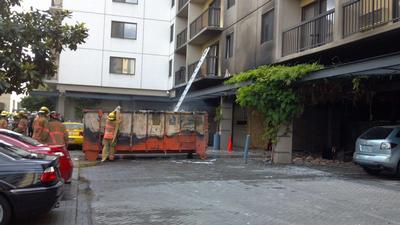 At 4:03 pm Engine 4 (Portland State University) responded to reports of a dumpster fire at 301 SW Lincoln St. (The Village at Lovejoy Fountain Tower Homes). Engine 4 arrived three minutes later and found a 14 story apartment building with flames coming from the ground level covered parking area. The fire was inside roughly a 20 cubic yard dumpster with flames rolling onto the ceiling and lapping out onto the exterior of the 2nd floor. Engine 4 immediately called for additional resources because of the amount/location of the fire and possible life safety hazard. 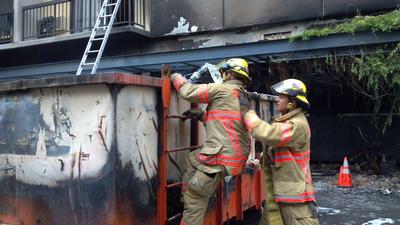 The crew from Engine 4 stretched a large hose line and extinguished the flames while additional fire crews searched the floors above for occupants. The fire was contained to the carport area but there was a significant amount of smoke in the units directly above the fire. The smoke conditions became lighter as crews climbed each floor and large ventilation fans were brought in to help remove the smoke from the building. The fire was brought under control at 4:42 pm.

There were no reports of injuries during this fire. The dumpster was removed from the carport and a Portland Fire Investigator is on scene working to determine the cause of this fire and damage estimates.