At 12:24 am, Portland and Gresham Fire crews were jointly dispatched to reports of an apartment on fire at 17031 SE Powell Blvd. - the Meadow Park East Apartments.

Upon arrival, firefighters found multiple people waiting outside the apartment building. They were immediately concerned about whether there were occupants trapped inside. An upper story apartment was fully involved in fire, and threatening to spread to five other units. Ladder truck crews climbed to the roof and began ventilating the smoke and flames, while engine crews attacked the fire with hose lines. After searching the apartments, fire crews determined that everyone escaped safely. 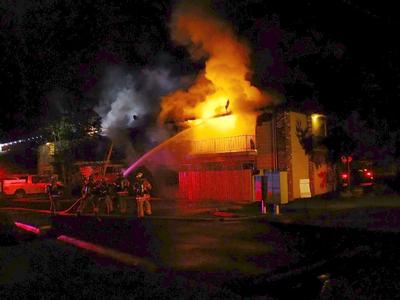 The Incident Commander called for a 2nd alarm response at 12:33 am, due to concerns that if the fire could not be stopped in the attic, it would spread to and destroy other units. The power company was called to shut of the power as electrical lines in the ceiling began arcing and endangering firefighting efforts.

The fire was brought under control around 12:55 am. One apartment unit is a complete loss and another has significant water damage, however the other four units were saved. A fire investigator has been called to the scene to determine the cause of the fire. There are no damage estimates at this time.