Portland Firefighters from Station 19 in the Mount Tabor neighborhood responded to an electrical problem at an apartment complex at 5217 East Burnside Street just before 6:00 a.m. this morning. Upon arrival, they determined that a malfunction in the electrical service line leading to the building had caused the metal mast leading into the attic to become hot and ignite the combustible materials around it. The officer from Engine 19 requested the incident to be balanced to an apartment fire bringing in an additional three engine companies, two ladder truck companies, and two battalion chiefs. Crews from Portland General Electric were also summoned to the scene to disconnect the power supply from the building. 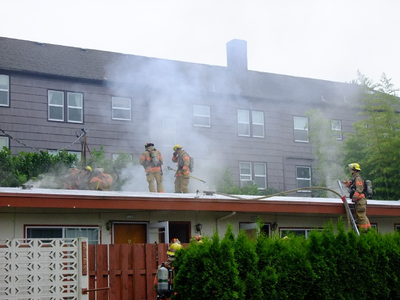 This was an unusual event for firefighters since they were not able to conduct an ordinary fire attack plan until the power supply to the building was confirmed to be de-energized. With fire in the attic, truck companies would normally open up holes in the roof to release heat and smoke from the attic space in order for engine companies to get hose lines in place below for extinguishment. With there being metal gutters and flashing present around the eaves of the building, there was a risk of firefighters being electrocuted if ground ladders came in contact with the roof. Luckily, the engine companies inside of the building were able to create enough of an opening to the attic space from below to keep the fire in check until PGE crews arrived thirty minutes later. 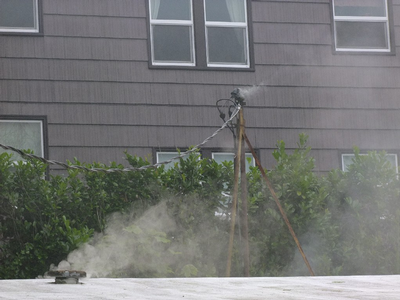 Once power was cut off to the building, crews were able to open up the roof and extinguish the remaining fire in the attic. Fire damage was confined to the attic, but a couple of the living spaces below suffered smoke and water damage. Red Cross was called out to the scene to assist with the displacement of six residents. There were no injuries reported at this fire and the last of the fire companies were able to clear the scene a little after 8:00 a.m.