At 5:21 this morning, dispatchers received a report of fire coming from the roof and rear of a home at 11001 NE Flanders Street. Call takers reported that there was a language barrier with the occupants and that they were unsure if people had evacuated from the structure. 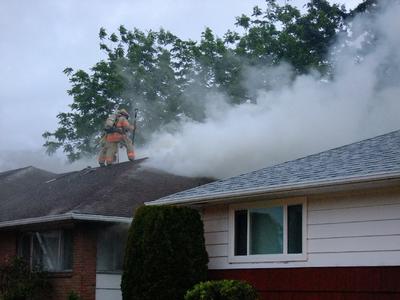 Incident Commanders reported that fire had extended into the attic space, and immediately sent truck crews to the roof to cut holes and ventilate hot gases vertically. After a quick coordinated interior attack fire crews had cleared the home of potential victims and stopped the progress of the fire.

After a thorough investigation and interview with the occupants, it was discovered that they were using a weed-burner to kill vegetation around the home yesterday. This process started a very small smoldering fire in surrounding bark mulch, which slowly grew undetected over the next day until it reached a wooden pallet that was next to the home. The wood, which burns more readily than bark mulch, ignited and eventually caught the exterior of the home on fire. After burning up the outside wall, the fire entered the attic space through the eaves allowing it to travel more quickly through the home. 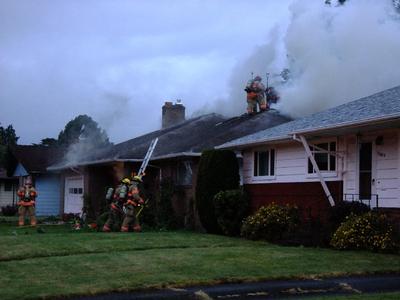 No injuries were reported, and the homeowners will be staying with family until the home is repaired. Damage is estimated at $15,000 to the structure and $2,500 to contents.

Portland Fire & Rescue reminds its citizens to remain aware of the hazards associated with using open flame processes near structures. Wetting the work area after burning can reduce the risk of a delayed secondary ignition, but not completely eliminate it.

I live at 1118 NE Emerson St. I feel like I'm living in a war zone. I've made several calls to the police about illegal fireworks. Since people keep firing mortars I'm going to assume that the police have not responded or are entirely ineffectual. So much for stepping up enforcement of illegal fireworks for the Fourth of July.