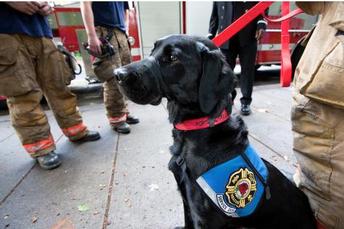 On June 14th, all that was left of a West Oakland, California construction site was some bent scaffolding, burnt drywall, and a concrete slab.  A huge fire destroyed the unfinished 119-unit Red Star Senior Apartments, causing an estimated $25 million damage.  Local investigators consider the fire suspicious.  A National Response Team (NRT) of the Bureau of Alcohol, Tobacco, Firearms, and Explosives (ATF) was activated at the City of Oakland's request to jointly investigate the fire's cause and origin with local law enforcement agencies.

According to Oakland Fire Chief Teresa Deloach Reed, "ATF's activiation of its National Response Team speaks to the seriousness of the fire that occurred in West Oakland, and the impact it had on thousands of Bay Area residents."  "It is our responsibility to do all we can to identify the cause of this fire, and bring the individuals who may be responsible to justice."  Helping in this effort was PF&R's own Lila, an arson canine, and her handler Lieutenant Fabian. 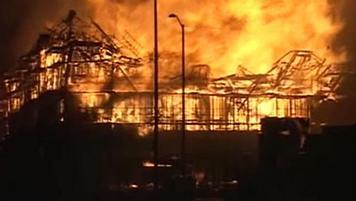 Lieutenant Fabian and Lila - a trained accelerant detection canine - are part of PF&R’s Arson Investigation Unit and the ATF's National Response Team.  In the case of the West Oakland fire, once the ATF’s National Response Team had scoured the site and structural engineers gave the go ahead, a team began to sift through the rubble for evidence.  The scene that Lieutenant Fabian and Lila processed was over a city block long; a lot of large equipment was required to get through the many layers of debris.  Lieutenant Fabian reports that, “Lila was trooper; she jumped right up on anything that needed to be investigated”.  The work was very tedious and the fire scene took close to a week to be processed.

This is the ninth activation of the NRT in Fiscal Year 2012 and number 730 since the inception of the team in 1978.  The NRT consists of four teams organized geographically to cover the United States.  Each team can respond within 24 hours to work jointly with State and local law enforcement/fire service personnnel in onsite investigations.  Portland Fire & Rescue is proud to have such a highly trained pair working right here in the City of Portland.