Portland Fire & Rescue was dispatched at 2:14 this afternoon to a head-on traffic accident at 7098 N Marine Drive. Initial reports from bystanders were that an adult male was pinned inside his vehicle. Engine 22 (St. Johns) and Engine 26 (Portsmouth/University Park) arrived first at 2:26 pm and found a sedan with significant left front damage and a single driver in critical condition pinned in the driver seat. Firefighters were able to quickly remove both drivers' side doors with the standard issue Holmatro tools to gain better access. Firefighters then determined that the drivers' legs were trapped under the steering wheel and dash but did not appear to be entangled. The roof was removed using a combination of Holmatro cutters and the Hilti saw. Then firefighters decided to use the First Responder Jack and chain maneuver they recently learned in specialized extrication training to lift the steering wheel and dash off the patient's legs. 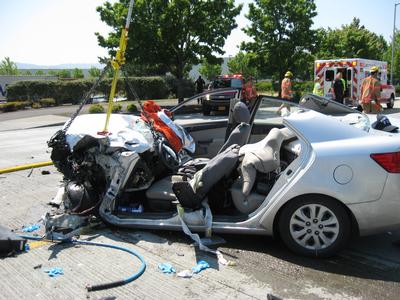 "This pin-in was our first opportunity to use the new Hi-Lift 1st Responder Jacks that were recently provided by the Shirlee Ann Fund," said Capt. Eric Pedersen. "It proved to be instrumental in freeing the victim."

Life Flight was initially called to assist in the transport of the patient to Emanuel Hospital. The incident commander later determined that the quickest transport would be by American Medical Response (AMR) Ambulance. A second stable male was also transported to Emanuel hospital by AMR. Both patients were being transported by 2:49 pm.

N Marine Drive was closed to all vehicular traffic during the extrication.

Thank you for writing one of the best informational articles I’ve read in a long time. You make sound points that I can relate to and grasp. This is great!
http://americanmdcenter.com

Blog is great i really like studying your articles. Stay up the good work! You understand, a lot of individuals are looking round for this info, you can help them greatly.
http://www.fresherswalkins.in

I definitely really liked every part of it and i also have
you saved as a favorite to look at new stuff on your website.
http://pmcc-india.com/why-pmcc

Superb Content! This is very useful article and included data very prominent and clear for everyone.
http://erosa.ca

Definitely, what a magnificent site and informative posts, I will bookmark your blog.Best Regards!
http://pmcc-india.com/why-pmcc

This is very interesting, You are a very skilled blogger. I ave joined your rss feed and look forward to seeking more of your excellent post.
http://americanmdcenter.com

Hello, I enjoy reading all of your article.
I wanted to write a little comment to support
you.
http://www.skumagic.com

Way cool! Some extremely valid points! I appreciate you writing this article and also the rest of the site
is very good.
http://pmcc-india.com/about-us

Hi, all is going sound here and ofcourse every one is sharing
facts, that’s truly excellent, keep up writing.
http://thanishq.com

Pretty! This has been an incredibly wonderful article.

Many thanks for providing these details.
http://www.dsnl.co.in/value-added-services.html

It was a fast rescue made my Portland Fire & Rescue

I pay a quick visit every day some blogs and information sites to read posts, but this blog provides quality based posts
http://straight2voicemail.com.au

The information you provide helps me, a lot of new things that I found after reading the article you wrote.
thank you very much
http://americanmdcenter.com/services/porcelain-veneers

I’m not sure where you’re getting your info, but great topic.
I needs to spend some time learning more or understanding more.
Thanks for great information I was looking for this info
for my mission
http://www.browline.com/it-outsourcing-London.html

Thank you for your blog.Much thanks again. Much obliged.
http://electriciansnorthyork.com

Useful information. Lucky me I discovered your website by
accident, and I am surprised why this accident did not happened earlier!

Useful info. Lucky me I discovered your site by chance, and I’m stunned why this coincidence didn’t happened in advance! I bookmarked it.
http://www.eyebrowsbymais.com

Usually I do not read article on blogs, but I wish to say that this write-up very pressured me to take a look at and do it! Your writing style has been surprised me. Thanks, quite great article.
http://americanmdcenter.com/services/porcelain-veneers

Helpful information. Fortunate me I discovered your website by chance, and I’m shocked why this accident did not came about in advance! I bookmarked it
http://drfirasosman.com

I am sure this piece of writing has touched all the internet users, its really really fastidious paragraph on building up new weblog
http://lmc-uae.com

I am really glad I have found this information. Nowadays bloggers publish only about gossip and internet stuff and this is really annoying. A good website with exciting content, this is what I need. Thanks for making this web-site, and I’ll be visiting again.
http://electriciansnorthyork.com

Way cool! Some very valid points! I appreciate you penning this article and also the rest of the website is also very good.Take a look at my website
http://americanmdcenter.com/ar/top-dentists-in-dubai

Hello to all, how is the whole thing, I think every one
is getting more from this web site, and your views are good in support
of new people
http://americanmdcenter.com/en/services/porcelain-veneers

Figure out what kind of deductible is in position and if the security the transportation company provides the firstly security or secondary.
http://movers-and-packers-delhi.in/