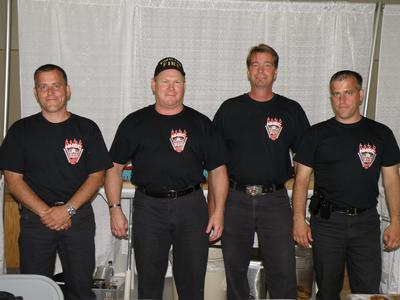 On June 16th, four PF&R members competed in the 5 Alarm Cook Off in Newport, Oregon. This was the first appearance that PF&R has made at the event, which raises money for the hungry.  The cook off took place at an elementary school with 10 fire departments - mainly from the coast - battling it out.  Representing PF&R was Tom Hurley who was Team Captain and Advisor.  Michael and Matthew Silva and Jed Hollenbeck were the  PF&R cooks.  They made Jed’s famous firehouse coleslaw, Korean style short ribs with Hawaiian marinade, and for dessert they layered wild strawberries on rounds of puff pastry, which turned out to be a huge crowd pleaser.  The team received two - first place awards for their dessert and ribs. Members of the team had a great time and cannot wait to do it next year.  Special thanks to Northwest Safety Clean for sponsoring PF&R's team.