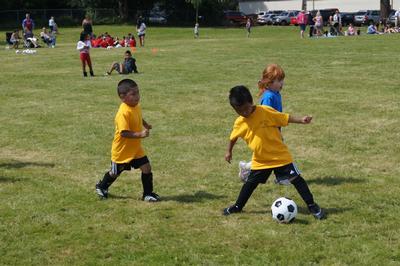 June 25 - 29 was the 9th annual Fogarty Soccer Camp.  Over 400 children participated in the camp with ages ranging from three to 13.  All of these children were able to participate free of charge due to the huge support of local sponsors.  Of the ten sponsors a few of the major contributors were Portland Firefighters Local 43, Financial Thrivent, Bashors Team Athletics, and Ascension Lutheran Church.  The children not only received coaching in the sport of soccer but also received a t-shirt, water bottle, shin guards, and a team picture.  Over 49 high school and college-aged volunteers helped to make the camp the success it was.  These volunteers did everything from set up to coaching to refereeing the games. 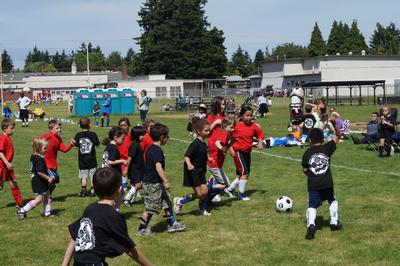 Portland Fire & Rescue Stations 29 (Gilbert) and 31 (Rockwood) were more than happy to come volunteer some time to grill up burgers and hot dogs for the volunteers, participants, and the entire surrounding neighborhoods for lunch during the days of the camp.  They were also in attendance and helping on Friday the 29th when the entire neighborhood was invited to come to Ascension Lutheran Church for a barbeque where there were hundreds of community members in attendance.  Portland Fire & Rescue is happy to support a retired member in this great activity for an entire community, and hopes that the event will continue for many years to come.