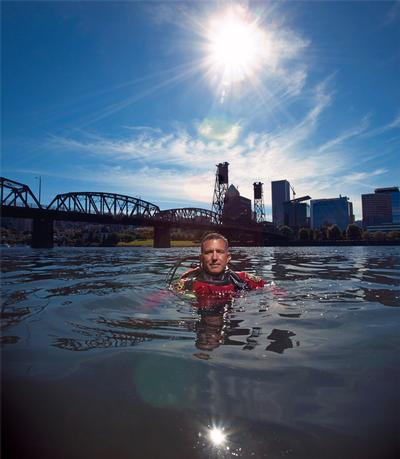 WITH ITS 12-FOOT ROLLING GLASS doors opening onto Gov.Tom McCall Waterfront Park, Fire Station 1 commands an enviable view of the Willamette River—so it makes sense that this is also the home of Portland Fire and Rescue’s Dive Team. A 12-year veteran of the team and one of its master-level divers, Lt. Rich Tyler is one of very few people to have experienced the murky netherworld that lies below the Willamette’s surface. Tyler’s job is to rescue and recover people from Portland’s waterways—and yes, it’s just as dangerous as it sounds.

I LEARNED TO DIVE IN THE COLD, dark waters of the Puget Sound. But what we do is not about pleasure diving. The Willamette River is dangerous. It’s full of debris. And you’re not looking for fish. You’re looking for people.

MANY OF THE SITUATIONS we respond to are cries for help, when someone feels like they have reached their limit in life. The bridge jumpers.

TEN FEET FROM THE SURFACE of the river, you’re at zero visibility. You enter that state of hyperawareness. You can’t see anything. You can hear your breathing. You have no other sense other than what you can feel through thick gloves.

THE FIRST TIME I RAN INTO A GROCERY CART, I didn’t know it was there until I was inside of it. I swam in head first. The current was forcing me, pushing me into the cart, and the wire mesh was holding me inside.

I BUMPED INTO A STURGEON ONCE. It kind of freaked me out, because it felt hard and scaly like a dinosaur. At first I thought it was a log. The guy was probably as big as I was. He got out of the way in his own sweet time. It’s his bottom of the river, not mine.

THERE ARE PARTS OF THE WILLAMETTE where the silt layer is endless. You put your arm into it or your leg into it or you try sitting in it, and it just feels soft and spongy—it’s so light you never hit bottom, you don’t feel a solid bottom. When you start searching for a person, sometimes you are just swimming in silt.

ONE RECOVERY CAUSED ME a little more thought process than normal. When I first got onto the dive team, we spent about a week looking for a duffel bag full of a teenage girl’s body parts in the Kelley Point slough. When you spend a week looking for something and you aren’t able to find it—it was difficult to walk away. Later, they found the duffel bag all the way out on Long Beach.

THERE ARE SOME DIVERS who go into that zero-visibility, highly technical environment and decide it isn’t for them and turn their gear in. We’ve had searches underneath barges, so you can’t just go to the surface and get fresh air. You have pilings, where you have to weave with a line—and then unweave the correct way in reverse to get yourself out. It can be overwhelming … overwhelming is definitely the appropriate word.