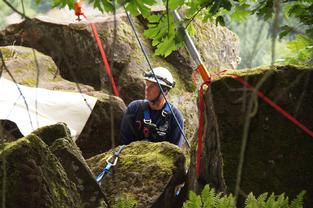 Once a year, the members of Station 1 (Old Town) hold a high angle rope rescue drill at Rocky Butte for crew members.  The definition of a high angle rope rescue is that the terrain has a slope angle of 60 degrees and higher where the rescuers are totally dependent upon the ropes used to keep them (and victims) from falling.  It also entails gaining access to an egress from the rescue location.  Across from the City Bible Church on Rocky Butte Road, there is a path that leads to many sheer rock faces with drops of 40 or more feet.  This has been the location of frequent falls and fatalities for people who are using the trail for recreational purposes at all times day and night.  On average, Station 1 is called four to five times in a year for a rope rescue at this location.  A rescue of this nature requires all 12 members of the station to respond due to the need for resources, but also because of the high technical aspect of the rescue.  The firefighters work together to complete the rescue working safely as a team. 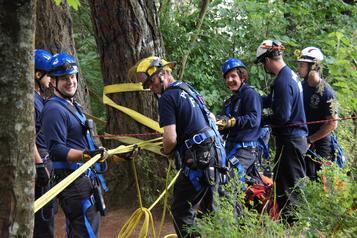 As one might expect with a rope rescue drill, there are a lot of different rope systems that are set up as well as a lot of equipment such as carabineers, pulleys, and harnesses just to name a few.  This particular drill featured one of the new specialty rescue tools that Station 1 has for use called the Vortex.  The Vortex is a very versatile piece of equipment that can be used for below grade rescue, confined spaces, and high angle rescue over any type of ledge.  With the ability to be set up as a tripod, bipod, and monopod at all different angles and heights, this tool can make the recovery effort of a fall victim safer and more efficient for responders.  Using the equipment mentioned, the members of Station 1 simulated a patient that had fallen 40 feet from a rock face to a rocky ledge below.  Like any complicated rescue, the firefighters made sure to move with a purpose, but not rush while continuously double checking all knots and hook ups before moving on to the next phase of the rescue.  Once a main line, safety line, Vortex, and 4 to 1 haul system were set to large trees used as anchors, the rescuer below on the ledge with the victim hooked himself and the victim (who was in a rescue skid) up to the rope system and they were ready to be hauled up.  The haul system being used was a 4 to 1 system meaning for every four feet you pull on the rope it moves what is being hauled one foot vertical, as well as giving the haul team a mechanical advantage. 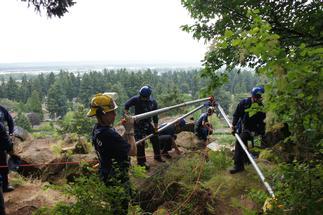 This type of drill is critical to keeping firefighters' skills honed.  This drill also provided an opportunity to learn to use a new tool that will help save lives in the future.  All members involved worked as a team to accomplish one goal, and although every rescue is different with the strategies and tactics, it demonstrated that Portland firefighters are prepared to respond to a multitude of different types of emergency rescues in the Portland area. 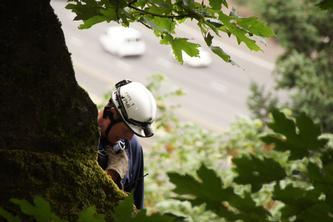