911 operators dispatched Station 2 (Parkrose) to an animal rescue at 7:35 pm near 118Th and N.E. Sandy Blvd. Homeowners could hear a kitten trapped and calling for help in the walls of the basement. Squad 1 (Downtown) was called in to assist. Upon arrival, fire crews could see that this would be no easy task. There are a series of drainage pipes that run about 4 feet down and the kitten could be in any one of them. After digging , fire crews utilized their search cameras to see if they could locate the kitten... to no avail. 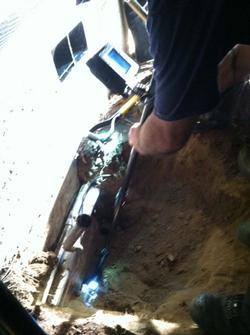 A local plumbing company was called and with the help of their snake camera the kitten was finally located. It was struggling to maneuver in the 4" pipe and was still 20 feet down the line. Firefighters didn't give up. Truck 2 introduced air on the opposite end of the pipe which in turn caused the kitten to work it's way back toward the opening. It was a slow and methodical process, but 6 hours later the kitten was rescued. 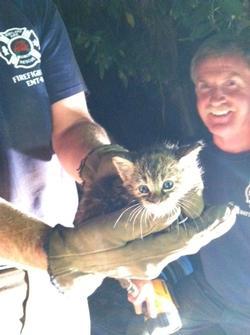 Firefighter Scott Pearson was the first one to retrieve the kitten (nicknamed "Champ" by firefighters on scene). "It was scared and hungry", said Pearson, "but I'm sure that it was glad to be out of that dark, damp hole."

Champ was taken to a local fire station where it will be taken care of for the night.