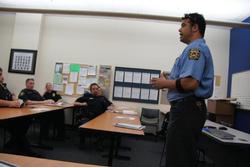 The enforcement operation was coupled with an education campaign using newspapers, radio and social media to explain why illegal fireworks are such a concern to our citizens and public safety agencies. This year, our dispatch center received 573 illegal fireworks complaint calls during the period of  July 3rd, 4 th and 5th.

“Portland Fire & Rescue inspectors, along with our partners at the Police Bureau, worked hard to reduce injuries, property loss, environmental impact, and anxiety to people and pets this Fourth of July season. My hope is that each year our collaboration lessens the problem,” said PF&R Chief Erin Janssens.

Even with beefed up patrols, Portland faced serious public safety issues due to illegal firework usage this year. On July 4th, illegal fireworks caused at least one significant fire at a duplex in Sellwood -- other fires are still being investigated. Additionally, on July 4th Portland Police arrested a man for allegedly setting off an illegal firework in Northeast Portland that misfired and hit an unaffiliated group nearby, sending two of them to the hospital, one with serious burns.

“Illegal fireworks use and misuse are not a victimless crime. Our partnership with PF&R is a great collaboration that allows us to educate and enforce these laws. We want Portlanders to have safe and legal Independence Day celebrations,” said Portland Police Chief Mike Reese.