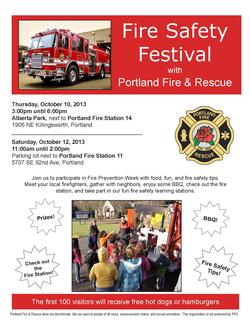 Fire Prevention Week has its roots in the Great Chicago Fire, which occurred on October 9, 1871. This tragic conflagration killed some 300 people, left 100,000 homeless, and destroyed more than 17,000 structures.

In 1920, President Woodrow Wilson issued the first national Fire Prevention Day proclamation. For more than 80 years, the nonprofit National Fire Protection Association (NFPA) has officially sponsored Fire Prevention Week, honoring the anniversary of the Great Chicago Fire and using the event to increase awareness of the dangers of fire.

This year, the theme is Kitchen Fires, one of the leading causes of fires in the home. PF&R is going out into the community to spread the word. The community is invited to two Fire Safety Festivals that will feature food, fun, and fire safety tips. Meet your local firefighters, gather with neighbors, enjoy some BBQ, and check out the fire station and our fun fire safety learning stations.