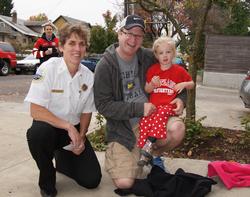 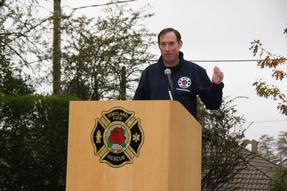 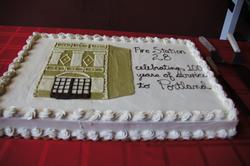 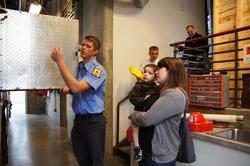 Portlanders came out on Saturday, Oct 26 to celebrate one of the city's oldest functioning fire stations, Station 28, in Rose City Park. Station 28 celebrates its 100th anniversary this year.

Commissioner Dan Saltzman discussed the station's history: how it was designed not by an architect, but by a battalion chief; how a neighborhood group called the Rose City Park Improvement League lobbied City Hall for this fire station; and how Sandy Boulevard was widened when the station was built to turn it into a major thoroughfare.

Fire Chief Erin Janssens talked about how the City smartly posted this station on Sandy Boulevard and how its positioning remains important today. She noted that the year this station went into service also coincides with when Portland Fire formally made prevention a focus with a special division. Prevention remains one of PF&R's key components. Chief Janssens also discussed how she personally feels connected to this station and neighborhood because it was home base for family members and she spent time here when she was growing up.

Here's a slideshow of the events: