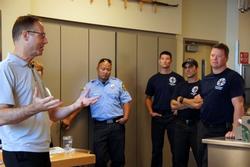 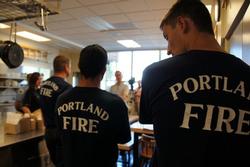 On Saturday, May 17, the American Heart Association held its annual Heart Walk along the Portland Waterfront and Steven Piplovick participated as he has many other active events for good causes. But this one was different. 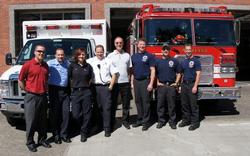 Piplovick went into cardiac arrest while walking along the East Bank Esplanade. Logistics were tough because of the crowds of people, a bridge closure, and a train blocking traffic on the east side of the river. While Portland Fire & Rescue and AMR ambulances rushed to get around the road blocks to reach Piplovick, nurses and doctors taking part in the walk began chest compressions and helped keep Piplovick alive until first responders reached the scene.

After multiple surgeries to correct his blocked arteries, Piplovick is on the mend and he wanted to meet the people who saved his life. Today, he came to Portland Fire & Rescue's Station 1 to meet some of the firefighters and AMR first responders who helped him that day. He thanked everyone and noted how lucky he was that people around him knew CPR.

While the people who assisted him that day were doctors and nurses, you don't need to be one to learn CPR and help save someone's life. PF&R will be teaching hands-only CPR for free at the next Sunday Parkways event in Southeast Portland on August 24.