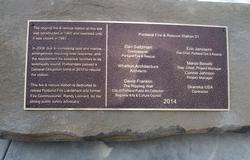 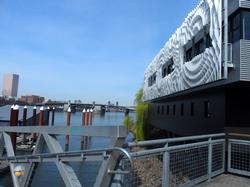 Back in 2009, then Commissioner Randy Leonard made the determination that in order to respond effectively to increasing water emergencies in the core area of Portland, we needed to re-open Station 21 as a land-marine based fire & rescue station.

He then worked to pull together a General Obligation Bond that the voters passed in 2010 to fund the construction a station primed to tackle this century’s hazards. And it comes at just the right time: the waterfront areas of our city are experiencing increasing development: areas that were once barren or solely industrial and becoming whole new neighborhoods. Our rivers are also now clean and are host to more recreation than ever. And with all this activity comes more people who need protection and response from Portland Fire & Rescue. In the past five years, water related incidents have increased 51 percent. 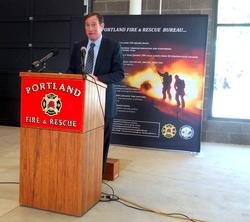 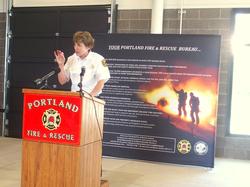 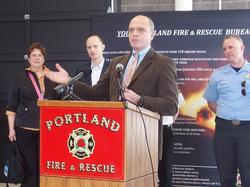 Today, Station 21 celebrated its Grand Opening with cake, tours, and remarks by Commissioner Dan Saltzman, former Commissioner Randy Leonard, and Fire Chief Erin Janssens. Station 21 is staffed with a crew of four firefighters and it's equipped with a fire engine to address land emergencies in the area neighborhoods. This station has a small vehicle we call ‘the mule’ that allows us to respond quickly to medical emergencies along the esplanade, and then transport people on a backboard to an ambulance. In addition to being structural firefighting and rescue experts, the firefighters at Station 21 also respond to water rescues using our rescue boat housed in the boathouse below, accessed from the dock. In another couple of months, we’ll welcome our new fire boat that was also funded through the 2010 GO Bond. Our new boats can travel at an amazing 43 knots: (that’s almost 50 miles per hour). They can also pump over 8,000 gallons of water per minute: that’s more than five fire engines combined can supply.

Station 21’s not only highly effective, it’s also highly efficient. It was designed to serve the city well today, and will for decades into our future.

This wasn’t an easy project: the footprint’s relatively small and it sits on a flood plain. In order to provide both rapid land and marine access, the banks needed to be stabilized, and as an essential emergency facility, everything needed to meet strict seismic standards. In the event of an earthquake, you can be assured firefighters here can continue to function on land or water, to whatever the emergency may be. The building is designed with sustainability in mind and includes many green features, such as stormwater planters, green power, and water efficiency. The architects, contractor and City staff who worked so hard on the project were acknowledged. 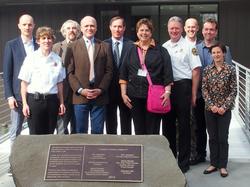 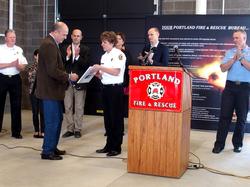 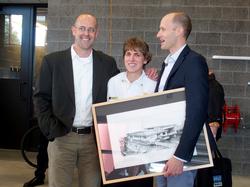 From the bridge, or while viewing the west side, you can see the artwork on the building’s façade. The work is called "The Rippling Wall” and it was created by artist David Franklin. “The Rippling Wall” is inspired by two elements: the beauty of the Willamette river’s surface when the rains we’re known for pour, and ancient regional petroglyphs. Water means much to us. It sustains us and gives us life. For firefighters, it helps us snuff out fires, but it also presents a hazard from which people must be saved.

There have been many who have come before us who have watched over this waterway. The Willamette River is to be respected and guarded. From its banks, Station 21 stands ready to protect life, property, and the environment. 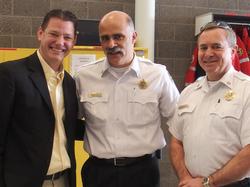 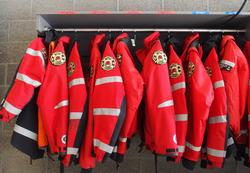 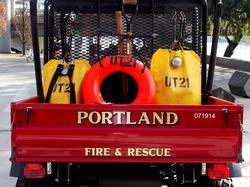