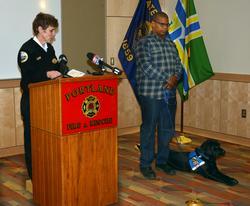 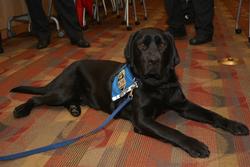 Zeus is assigned to Lt. Jackson, who also functions as an ATF Taskforce Agent. The duo returned to PF&R in December after training.

An arson dog can be conditioned to detect and alert hydrocarbons found in petroleum-based fuel in exchange for a reward in food.  Like Lila, Zeus won’t eat out of a bowl until he retires.

Experienced canines are capable of detecting accelerants such as gasoline, diesel, kerosene, paint thinner, and charcoal fluid and can alert as well on over 20 different hydrocarbons.

After his training was complete, Zeus was certified by a chemist as being able to tell the difference between varieties of hydrocarbon scents in small quantities necessary to start a fire. This certification is crucial when evidence is uncovered by canines and their handlers, as they become a key point in criminal and civil trials.

Zeus will assist Lt. Jackson with fire scene investigations, especially in determining the origin and cause of a fire. All alerts by Zeus are verified by the Oregon State Crime Lab. To keep their skills sharp, the team trains at random intervals 2-3 times per day. PF&R’s Accelerant Canine Detection Team not only responds to incidents within the City of Portland, they are also members of the national response team and can be called to anywhere within the U.S.

Accelerant detection canines usually work a minimum of five years and no more than nine years of age. Zeus is co-owned by PF&R and the ATF through a mutual agreement until he retires, at which time he will be signed over to Lt. Jackson. Lila now resides with Lt. Jackson as a family pet, as Zeus will after his retirement.