The MAX Green Line, debuting September 12 in East Portland, is expected to bring much-anticipated development to the area.

The MAX Green Line opens tomorrow, more than 30 years after an 1-205 transit right of way was established in 1976, opening the door to greatly increased development in East Portland's Lents and Gateway neighborhoods. “What we are seeing is an explosion in opportunities for developing housing and industry around transit centers,” Nick told the Portland Tribune for its special “Green Means Go” guide to the new Green Line.

Outer South-East Portland will at long last have a light rail connection to the City’s central core and Western suburbs, it's expected that the same investment that followed MAX’s entry in other parts of Portalnd will flow to Lents and Gateway as well. “Not only will light rail leverage more housing in transit centers, but it gives residents of affordable housing more transportation options,” Nick told the Tribune’s Kevin Curry.

Indeed, new development has already arrived, as a trasit-oriented development across from Clackamas Town Center is underway.

The Green Line will move the City toward its goal of creating “20-minute communities” in and around Portland while boosting two of its outer East neighborhoods, historically underserved by light rail – says Nick, “Gateway and Lents are a big part of our future.”

Visit trimet.org for more on the new Green Line 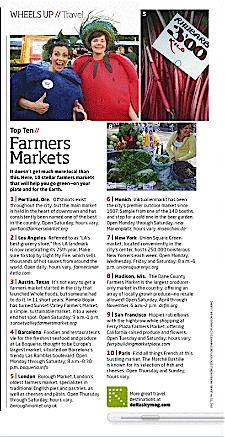 We in Portland know that our farmers markets are top-notch, but now the rest of the world knows, too. Delta Sky Magazine's September issue ranks Portland's farmers markets number one worldwide, above Barcelona, Paris, San Francisco, and Munich.

Farmers markets are cropping up all over town - several new markets opened this year.

The farmers market season is drawing to a close, but there are still great meats, cheeses, breads, produce, and flowers available around town every weekend.

Oregonian reporter Irina Verzemnieks recently spent a week volunteering with Portland Adventist Community Services (PACS) on 110th and Halsey in NE Portland, and has chronicled her experience in a series of articles in the Oregonian.

Last year alone, PACS distributed over 1 million pounds of food, sold over 300,000 items in its low-cost thrift stores, and provided primary care to nearly 1,000 patients in its Family Health Center.

Volunteer opportunities abound at PACS, where their many programs offer something for everyone – Verzemnieks writes that according to PACS Director Paul Cole, “while all of the services they offer are important, perhaps the most important, transformative one is giving people a place where they can be of service to someone else because of what it reveals to them about themselves.”

Several areas around town usually dedicated to cars are becoming parks - but just for the day. 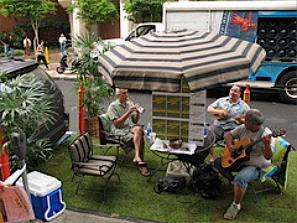 Matt Davis writes two items of note in this week's Portland Mercury ("We Mean it This Time" and "Some Friends you are"). The first, discusses Nick's recent comments to the Portland Business Alliance on the end of Sit / Lie and the forthcoming Free Sidewalk Plan. The second, is a roundup of downtown housing and homeless issues: The Resource Access Center (RAC), Friends of Urban Renewal, the affordable housing memorial last week, and our collective responsibility for caring for those with the greatest needs.

And from today's Oregonian, a guest opinion piece by Charles Wilhoite, current chairman of the Portland Business Alliance. “Taking back our downtown streets,” credits Commissioner Fish and County Chair Ted Wheeler for their hard work to provide services to our most vulnerable in a tough economic climate. Read full story here.

Illustration by B T Livermore