On Monday, The Oregonian published a story about how Community Supported Agriculture farms (CSAs) are making it possible for everyone to have access to fresh, local produce. 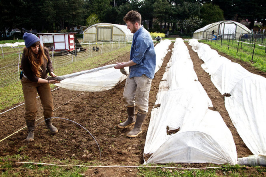 On Monday, The Oregonian published a story about how Community Supported Agriculture farms (CSAs) are making it possible for everyone to have access to fresh, local produce.

In the past, CSAs have worked with members paying one larger lump sum at the beginning of the growing season, and in return they receive a weekly basket of farm-fresh produce from their local farmers. In the end, those CSA members would save significantly more money compared to buying at grocery stores. But the up front cost for seasonal membership was simply not affordable for many hardworking families.

But times are changing.

In her story, Oregonian reporter Kelly House features one of our partners, Zenger Farm, and the work they did to reconstruct payment plans so that CSAs would be able to accept food stamps as a method of payment. Zenger Farm is an urban farm that models, promotes and educates sustainable food systems, environmental stewardship, community development, and access to good food for all.

Kelly writes that in the past, CSAs “have long been criticized as a savings open only to those with ample disposable income.” Because of the work of Zenger Farm and other local farmers in Oregon, it’s becoming possible that anyone, no matter the financial means of paying for the produce, can become members.

Kelly House in The Oregonian

Portland City Commissioner Nick Fish was a guest on OPB's Think Out Loud for a discussion of Speaker Tina Kotek's Section 8 legislation on Tuesday, April 23

Yesterday, Nick was a guest on OPB's Think Out Loud for a segment about Speaker Tina Kotek's proposed legislation to reform the Housing Choice Voucher - or Section 8 - program statewide. He joined Phil Owen of the Rental Housing Association of Greater Portland, a group representing mostly small landlords in the Portland area.

Section 8, administered by local housing authorities, is the nation's largest housing program. Here in Multnomah County, Home Forward (formerly the Housing Authority of Portland) administers more than 8,000 vouchers, which deliver more than $50 million in rent assistance to our community each year. Who uses vouchers in our community? In large part, voucher-holders are older adults, families with children, people with disabilities, and people from communities of color.

When Nick took office in 2008 he convened a task force to identify common-sense strategies to make the Section 8 program work better for landlords and renters. The good work of Jill Riddle and the team at Home Forward ultimately helped more renters with vouchers successfully find apartments, and has become a model for the rest of the state.

But a fundamental question remains. Currently, Oregon law allows landlords to refuse applications from voucher-holders. Does someone who uses a voucher to pay part of their rent deserve the same treatment as someone who doesn't? We believe they do.

Speaker Kotek's legislation will address this question by removing the exemption allowing landlords to refuse to process applications from voucher-holders. It will also expand the improvements made by Home Forward to the rest of the state.

The legislation will not force a landlord to rent to a voucher-holder. Rather, it will require them to accept and process applications from voucher-holders through their normal screening criteria. This will put people with vouchers on a level playing field with other renters and give them a fair chance at an apartment of their choosing.

The City of Portland strongly supports Speaker Kotek's bill, which is currently with the Join Ways and Means Committee in Salem. We're proud to be part of the broad coalition working to pass this bill, and look forward to the day when participants in the nation's largest housing program receive equal treatment in Oregon's private housing market. 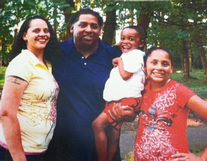 Habitat for Humanity is a fantastic organization, dedicated to providing homeownership opportunities to families who otherwise would not be able to afford to buy a home. Habitat chooses qualified families with the greatest need who are able to pay an affordable monthly mortgage with a 0% interest rate.

Habitat’s program is unique - families must contribute 500 hours of sweat equity to qualify for a Habitat home. This means spending at least 500 hours helping to build their home, or even paying it forward and helping build a Habitat neighbor’s home.

The idea of Habitat is a “hand up, not a hand out.”

At the breakfast, attendees were able to see first-hand the wonderful work by Habitat and their volunteers. Families who have been part of Habitat’s homeownership program were present, including guest speaker and homeowner Bylinda Tollefsen. Bylinda is the first person in her family to ever own a home.

Bylinda moves into her Habitat home next month!

Thank you, Habitat, for making it possible for families to achieve the dream of homeownership.

Yesterday, The Portland Observer ran a story on our fantastic Park Rangers program.

Yesterday, The Portland Observer ran a story on our fantastic Park Rangers program.

The story by Cari Hachmann highlighted the great work that the Rangers are doing in our community to ensure that everyone is able to enjoy our Gold Medal system.

Last year, we were proud to introduce an expanded downtown Portland Parks & Recreation Rangers program throughout our city’s parks and natural areas. The rangers focus is not just on enforcing park rules but connecting with the community by acting as an extra set of eyes and ears to keep our parks safe and fun. These rangers are our “parks ambassadors.”

All Rangers have been certified by the Department of Public Safety and have trained with Oregon State Parks, the Multnomah County Sheriff’s office, and the Portland Police Bureau.

But that’s not what makes them special.

Beyond their formal training, PP&R wanted to make sure that they brought on rangers that could truly connect with the community that they would serve. The Rangers’ ability to connect with who they are serving has truly made our Park Rangers a success!

The Parks have eyes

Cari Hachmann in The Portland Observer

Photo courtesy of The Portland Observer

Join us on May 11 for the 2013 Festival of the Birds at Sellwood Parkand Oaks Bottom Wildlife Refuge. 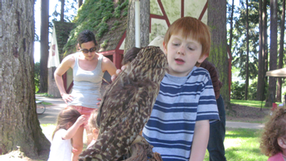 Join us on May 11 for the 2013 Festival of the Birds at Sellwood Parkand Oaks Bottom Wildlife Refuge.

Portland Parks & Recreation is partnering up with US Fish and Wildlife to host this celebration in honor of migratory birds. Families and bird lovers get the chance to spend the day outdoors learning about birds.

Oaks Bottom Refuge is an important spot for migrating birds. Birds get the opportunity to nest and re-fuel from traveling distances as far away asArgentina. Oaks Bottom is Portland’s first Migratory Bird Park!

At the event you can participate in guided bird walks, enjoy live music and stories, kid’s games, see live birds from the Audubon society and experience much more “bird-oriented” activities.

For more information about the Festival of Birds, visit Portland Migratory Birds’ website or call (503) 823 - 3601.