The popular $5 5K run/walk series starts up again this Sunday at Fernhill Park! 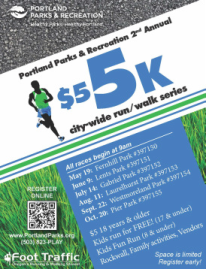 The popular $5 5K run/walk series starts up again this Sunday at Fernhill Park!

5K run/walks are scheduled in neighborhoods around Portland from May to October, and are a great way for you to stay in shape for a great price.

The series started last year, and brought over 2,000 runners and walkers to races around town. This year, we are planning for even bigger turnouts. Portland Parks & Recreation has added more courses for all types of athletes - some flat, and others with more challenging inclines.

The race on Sunday is sold out, but the waitlist is still open. If you are interested in running you can visit the $5 5K series page on the PP&R website to be added to the waitlist.

You can also enjoy other fun activities like climbing a 40-foot rockwall, music, various kid activities and much more.

Lace up, cut loose, and have fun!

This afternoon, Nick was proud to attend the Grand Opening of The Fields Park in Northwest Portland!

This afternoon, Nick was proud to attend the Grand Opening of The Fields Park in Northwest Portland!

The Fields was created through a partnership with Portland Parks & Recreation, the Portland Development Commission, and the Pearl District Neighborhood Association. The Fields is the third park outlined in the Portland River District Park System Urban Design Framework Study. The four parks included in the Framework were Jamison Square,Tanner Springs Park, The Fields Park, and a potential Riverfront Park.

The celebration featured a Native American blessing of the land, a poetry reading by Founding Co-chair of the Pacific Northwest College of Art Barry Sanders, and artwork done by local school children.

Along with being a fantastic outdoor space for people, The Fields is a great place for your dog. The Fields was created with our four-legged friends in mind. It features different amenities for dogs of all shapes and sizes.

The Fields Park is located at NW 10th and Overton. Come out and play! 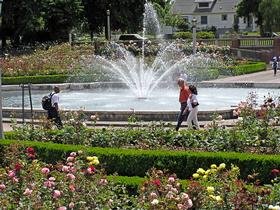 The Wonder Weeders help reduce or eliminate herbicide use, and contribute to the overall beauty and health of the garden. They are essential to the success of the North Portland rose garden.

You don’t need to have the “greenest” thumb to be a Wonder Weeder. Just commit to at least an hour of weeding and bring your own weeding tool and gloves.

Being part of Wonder Weeders is a great way to connect with the community, be outdoors, and help maintain one of Portland’s oldest public gardens.

Wonder Weeders meet once a month to weed the garden.The next weeding party is June 3. Email penrosegarden@gmail.com for more information.

Don’t forget to join us on June 27 for the Peninsula Park Centennial Celebration from 11 am - 11 pm!

Summer vacation is right around the corner. Have fun and stay healthy at one of Portland Parks & Recreation’s (PP&R) many summer camps!

Summer vacation is right around the corner. Have fun and stay healthy at one of Portland Parks & Recreation’s (PP&R) many summer camps!

There’s a summer camp for every kid at the many parks and community centers around the city. Swimming, tennis, basketball, art, dance, and music are just a few of the options available to keep kids active during their time off from school. Tots (age 1) to teens can participate in PP&R camps.

Summer camp is a great way for kids to build social skills, confidence, make new friends, and have fun!

Registering is easy. You can mail, phone, fax or walk-in your registration form to any PP&R facility. You can also register online on the PP&R website.

To see the full list of summer camps, take a look at PP&R’s online catalog.

Get out in the summer sun and have some fun!

This Friday officially kicks off the 2013 Portland Rose Festival!

This Friday officially kicks off the 2013 Portland Rose Festival!

Enjoy events like the Dragon Boat Races, a carnival at Tom McCall Waterfront Park, and three spectacular parades – the Starlight parade, the Junior Rose Parade, and the Grand Floral Parade. The Grand Floral Parade is the centerpiece of the festival. It’s the second largest all-floral parade in the United States, and the largest single-day event in Portland.

This year, Nick and his son are proud to represent the City in the Starlight Parade on Saturday, June 1.

Portland Rose Festival Kicks Off May 24

In The Skanner News