2009 was my first full year as Housing Commissioner for the City of Portland. What a year!

We experienced a disastrous economic downturn. Oregon ranked in the top five nationally in unemployment, homelessness, and hunger; and ranked 14th in foreclosures for the month of November. To make matters works, the City and the County cut their budgets.

In the face of these historic events, the housing community came together and made steady progress.

1. A New Portland Housing Bureau (PHB) - In 2008, Mayor Adams and I announced that the PDC and BHCD housing teams would be combined to form a new bureau, covering the continuum of housing needs, from ending homelessness to increasing homeownership. The new bureau was officially launched on July 1, and I hired a dynamic new leader to serve as our first Director, Margaret Van Vliet.

2. Building the Resource Access Center - We broke ground on the Resource Access Center, a centerpiece of the 10-Year Plan to End Homelessness. The RAC will be a one-stop center for people experiencing homelessness, with services, housing, and shelter under one roof. The construction phase will generate 125 family-wage jobs. When complete, it will be a LEED Platinum building.

3. New Funding for Housing - While other bureaus took cuts, the Portland Housing Bureau received a 30% boost over its base budget. The City was able to more than double its investment in the community's Short Term Rent Assistance program thanks to securing federal stimulus funding. This has prevented hundreds of households, hit by the recession, from falling into homelessness. And, the legislature finally adopted a new dedicated source of funding for housing, based on an increase in the document recording fee.

4. An Emergency Action Plan for the Homeless - In December 2008, facing the worst winter storm in decades, the City developed its first coordinated plan for inclement weather. This year we strengthened the plan. I'm proud of the hard work of all of our partners.

6. Home Ownership and Foreclosure Prevention - With local foreclosures on the rise, PHB invested $315,000 in trusted non-profit partners to address foreclosure prevention. The legislature passed important new protections for renters and homeowners impacted by foreclosures. And we are working to make the dream of homeownership a reality for more Portlanders and to close the minority homeownership gap.

7. Protecting the 30% Set-Aside for Housing - The City invested $16,489,048 of TIF in the last fiscal year on a number of key housing projects. I also joined with advocates to oppose the use of TIF set-aside funds to minor league baseball in Lents Park. To promote greater transparency and accountability, we issued a report on the set-aside last Winter and will issue a second report this January.

8. Accountability on Tax Abatements - I am committed to greater transparency and accountability for our residential tax abatement programs. In mid-December, I presented to Council the second annual report. The report documents the City's enhanced compliance measures, success in targeting households earning 60% or less of the median family income, and a decrease in foregone revenue.

9. Focus on Preservation - The City has an ambitious plan to preserve affordable housing. We call it "11 by 13" because it is designed to preserve 11 properties with expiring federal rent subsidy contracts between now and 2013. We have developed a number of funding tools, including tax increment financing and a Section 108 loan pool. We are also working with Senators Merkley and Wyden for a change in the federal law which will free up additional resources to preserve housing for low-income residents.

None of this would have been possible without the support of Mayor Sam Adams and my Council colleagues, the strong partnership with the County, the dedication of our non-profit providers, and the hard work of the new PHB team.

During these tough times, we are focusing on strengthening the foundation of our housing system, expanding the safety net, targeting our resources to meet the biggest need, increasing transparency and accountability, and planning for the future.

It is an honor to serve as Housing Commissioner. I look forward to continuing our work together to make sure that everyone in our community has a home.

P.S. For more about our housing accomplishments over the past year, check out this article from Street Roots. 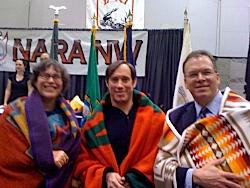 The celebration also marked NARA's 40th anniversary. In 1970, NARA was solely an outpatient treatment center, but has grown to offer a wide variety of social services and health care to our native community.

"The powwow is a symbol of the community and our role in it," Executive Director Jackie Mercer told the Oregonian's Marty Hughley. "Our work is to be the servants of the community, and this is a big way of giving back for us."

At the ceremony, Nick was honored to be presented with the Chief Joseph blanket by Jackie Mercer and her NARA team.

Nick is proud to co-chair, with County Commissioner Deborah Kafoury, the Complete Count Committee for Census 2010. The Committee is working to ensure that every person in Oregon, and especially those in traditionally hard to count communities, is a part of the count - at stake is $400 billion in federal funding as well as the potential addition of a seat in the House of Representatives.

In 2000, writes Anne Saker in this morning's Oregonian, only two-thirds of households returned their surveys. This time around, the Census Bureau is using a much shorter form, just 10 questions. Keep an eye out for your form, arriving soon!

Nick joined Mayor Adams, former Mayor Tom Potter, and guests from across the Northwest on New Year's Eve for the Cambodian-American Community of Oregon's (CACO) 2009 Khmer Heritage Night. The event also marked CACO's 20th Anniversary, and included performances by the Cambodian Dance Troupe of Oregon and the CACO troupe.

The evening also featured a surprise presentation of the President Award to Nick's wife, Portland State University Professor Patricia Schechter. Professor Schechter was honored for her work with CACO's oral history workshops and their KRT2 forum. 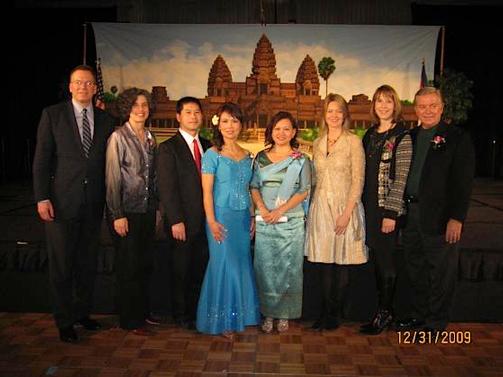 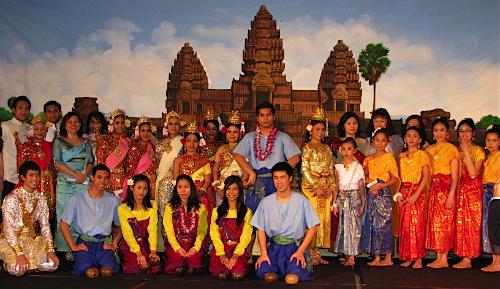