On Thursday, BridgeTown Inc. held their first Night Strike of 2013.

On Thursday, BridgeTown Inc. held their first Night Strike of 2013. 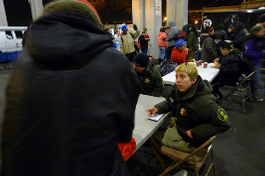 Night Strike is a volunteer-led event to help people experiencing homelessness. Each Thursday, volunteers gather on Naito parkway under the Burnside Bridge to provide a free dinner for our community’s most vulnerable. Volunteers also help out with foot washing, haircuts, shaves, and provide portable showers.

Sleeping bags, warm clothes, and hygiene products are also passed out to those in need.

Not only does Night Strike provide some essential basic necessities, it also provides a wonderful human connection. One guest, Nate, said that “Night Strike is humanizing…this place helps remind you it’s not all that bad.”

From 2011’s Homeless Street and Shelter Count, we know that on any night, there are about 2,700 people sleeping outside or in emergency shelters, and nearly 2,000 more are living in transitional housing after being homeless.

With a rising tide of need, and fewer resources each year, we count on partners like Night Strike to make a difference..

To get involved, contact Justin Spahn, BridgeTown’s event director at (503) 664-0653. To learn more about Night Strike, or to find a list of items to donate visit the Night Strike Page on BridgeTown‘s website.

Sara Hotman in The Oregonian

Portland Parks & Recreation is holding an open house for the Whitaker Farm Project. 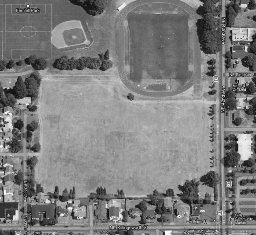 Commissioner Fish is hosting an open house for the Whitaker Farm Project.

Since 2007, the space where Whitaker Middle School one stood has been vacant. PPS has no set plan for the area in the next five years and we have a unique opportunity to do something wonderful with this land.

The Whitaker Farm Project will be an area for the community to have a garden where people will learn to grow their own food. Growing food together can help us fight hunger and poverty, while providing opportunities to learn life-long skills.

To learn more about the project, join us at the open house this Wednesday.

The oldest public rose garden in Portland is turning 100 this June!

The oldest public rose garden in Portland is turning 100 this June!

Right now the garden is full of stakes that mark where the 3,000 donated roses will be planted. Groups of volunteers are fertilizing the spot where each plant will be set in the soil.

The planting will begin in February, and PP&R needs your help! We are looking for 30 volunteers on February 19-21 to help plant the roses.

The roses were generously donated by Weeks Roses, Star Roses and Baileys Nursery, but the garden still needs some support for an essential piece of the garden. The garden needs mulch – a lot of it. Mulch is critical to keep moisture and warmth in the soil, and protect the roses from midges, a parasite that attacks the plants.

To volunteer to plant roses, please send an email to penrosevolunteers@gmail.com. To learn more about the Centennial, or make a contribution to the mulch fund, visit www.portlandparksfoundation.org.

Nick was proud to join his Council colleagues this morning to celebrate the completion of our E205 initiative.

Nick was proud to join his Council colleagues this morning to celebrate the completion of our E205 initiative.

On a beautiful spring day in 2011, a visit to a strangely empty East Holladay Park sparked the vision for E205.

East Holladay is in the heart of Hazelwood, a neighborhood full of families with children, but the park didn’t have the amenities kids deserve. In East Portland, this story is familiar in too many neighborhoods. Families and children are growing up without a great neighborhood park.

This was the inspiration for E205.

Nick secured a $500,000 special appropriation in the 2012-13 budget, which was matched by generous private donors and system development funds.

Over the past twenty years, the City has purchased acres of land in East Portland, and completed master plans for future parks (including Parklane and Beech, among others). But it hasn’t had the funds to build out new parks.

Nick challenged his Parks team to target small improvements with big impacts - so families could enjoy their parks now, not wait until they were fully developed. The Parks team found creative ways to deliver park improvements, stretching every dollar spent. We were guided by four key goals: equity for East Portland, making progress now, leveraging resources, and investing up to $1 million.

Special thanks to the great team at Portland Parks & Recreation, our many community partners, and all the neighbors in East Portland who helped make E205 a success!

Please join us on February 17 for the premiere of American Winter at the Portand International Film Festival. 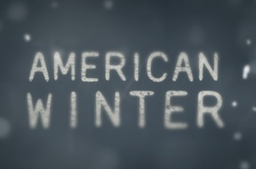 Please join us on February 17 for the premiere of American Winter.

It is an honest, groundbreaking film - and reminds us why it is so important to fund our safety net services.

Immediately following the premiere, the filmmakers will host a benefit reception for 211Info.

While there is no cost to attend the reception, we encourage you to sign up as a "partner" of 211, and donate what you can to help their mission. 211 will also accept donations at the reception.

Special thanks to the Gantz brothers for making this important film, and to 211Info for their great work.

But most of all, thanks to the families in the film who share their stories of struggle and hope.

Can’t make it on February 17? There is a second screening on Monday, February 18 at 7:30 pm at Cinemagic theater.