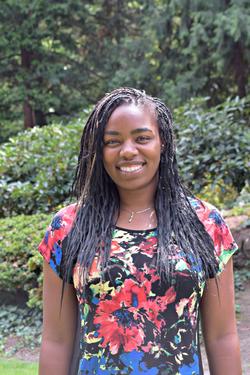 We are delighted to welcome Kassamira Carter-Howard to the Fish Team as our Summer Intern! She will be serving as our Community Service Aide and will be here until the end of August.

Kassamira grew up in Northeast Portland, and has been heavily involved in the community. In addition to working with community service organizations such as Loaves and Fishes and serving as a teacher’s assistant at the OPAL school, she spent most of her time working as a Swim Instructor. She worked for Parks and Recreation for 5 years teaching swimming lessons at various neighborhood pools like Grant, Peninsula, and Matt Dishman Community Center.

Her passion for social justice and bettering the quality of life for communities of color inspired her to serve on the Multnomah Youth Commission’s Youth Against Violence Committee. There, she collaborated with other youth to craft policy recommendations for city officials that aimed to reduce violence among young people in the community.

Kassamira is a rising junior at Santa Clara University, and will be studying abroad in Africa in the fall.

As our Community Service Aide, Kassamira will prepare and staff Commissioner Nick Fish at community events and engagements. She will also conduct fact-gathering and policy research as well as update content for the Commissioner’s web page and other miscellaneous office tasks.

Nick had a busy weekend out and about in Portland.

On Saturday, he was pleased to attend the Regional Arts & Culture Council’s (RACC) 20th anniversary celebration and fundraiser, “In the Garden of Artistic Delights.” The celebration was hosted by Jim Sampson and Geof Beasley in their magical Bella Madrona gardens.

Nick is proud to serve as Council liaison to RACC and our diverse community arts organizations. Proceeds from the fundraiser will go towards RACC’s grantmaking programs for individual artists.

On Sunday morning, Nick had breakfast at the Bipartisan Cafe in East Portland, which is celebrating its 10th anniversary. Then he visited the annual Montavilla Street Fair. Local fairs are a great way to enjoy the sun, meet our neighbors, and support small businesses!

The Street Fair was funded, in part, by Venture Portland. Nick serves as Council liaison to Venture Portland, which is dedicated to growing Portland’s 50 unique neighborhood business districts.

The powerful memorial was founded by the Oregon Nikkei Endowment. It serves as both a celebration of the Japanese American experience in the Pacific Northwest, and as an important reminder to protect civil liberties during times of crisis.

At the end of the event, Nick announced a $25,000 grant from the City designed to help renovate the beautiful plaza. The celebration was followed by a cruise on the Willamette River with Thomas Lauderdale and friends. 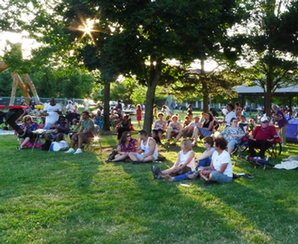 Grab your friends and have a fun night out!

National Night Out brings neighbors and local law enforcement officers together for great neighborhood parties and festivals that help strengthen our community.

Tonight marks 32 years of National Night Out celebrations around the country. In Portland, more than 20,000 people participate each year.

Whether it’s a block party, cookout, parade, or flashlight walk, there’s sure to be something fun happening in your area!

Nick is looking forward to joining his friend, former Senator Avel Gordly, for the Madison South neighborhood’s National Night Out party this evening.

While National Night Out is traditionally celebrated on the first Tuesday in August, Portland-area events are happening all week long. Check out the Office of Neighborhood Involvement’s website for a full schedule of National Night Out events. 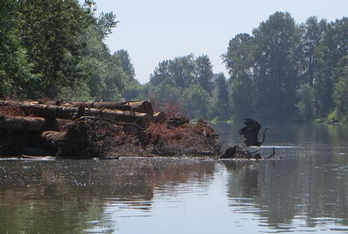 Over the last 50 years, Portland has made great progress for the health of our watersheds. From the Big Pipe project to our new Watershed Report Cards, our public investments are making a big difference.

Wood helps strengthen our water ecosystems, so the Bureau of Environmental Services (BES) recently installed 35 engineered “log jams” in the Lower Columbia Slough. The log jams will serve as habitat for migrating and breeding salmon on their way to the ocean.

Our new Watershed Report Cards include grades for both habitat and fish and wildlife. The Columbia Slough currently has a D- rating for habitat, and an F for fish and wildlife – in part because because there has been virtually no habitat-supporting wood in the slough over the last 100 years.

We know we can do better – and these new log jams can help us earn a higher grade!

To learn more about watershed health and our Report Cards, visit BES’s website. 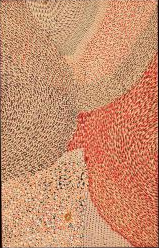 The exhibit is part of a national tour that includes over 75 paintings by 9 Indigenous Australian artists. Their stunning, expressive artwork was inspired by their ancient cultural traditions.

The artists created their art in a unique frontier where both Indigenous and Western cultures met. No Boundaries serves as is a great reminder that contemporary art comes from all over the world.

No Boundaries runs through August 16 in the Mason Erhman Building Annex in Chinatown. Check out RACC’s website for more information.