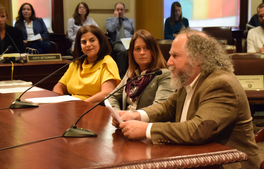 Today, Council passed a resolution directing all City bureaus to adopt the Parks Bureau’s existing policy that prohibits the use of Avitrol, a deadly neurotoxin, and any other avicides (bird pest control) on City owned and managed land.

“These poisons have absolutely no place anywhere in our community,” said Commissioner Nick Fish. “They not only put our birds and wildlife at risk, but they also put people and pets at risk as well.”

Special thanks to Bob Sallinger and the Portland Audubon Society for their partnership, the Humane Society of the United States, the Portland Business Alliance, and to BES and Parks staff.

Kale William in The Oregonian

Protecting Crows and Other Birds

Kale William in The Oregonian

Portland Fleet Week 2019 Begins Wednesday: What You Need to Need To Know About Bridge Lifts, Ships And Tours

Lizzy Acker in The Oregonian

Joseph Gallivan in the Portland Tribune

Gordon Friedman in the Oregonian

Lan Su Chinese Garden is the product of a sister-city partnership between the City of Portland and Suzhou, China. The garden was a shared vision of the late Mayor Vera Katz and the Suzhou Foreign Affairs Office. It broke ground on June 7, 1999.

Nick presented a proclamation celebrating Lan Su’s 20 years as a world-class cultural site and one of Portland’s greatest treasures.

On Saturday, Nick and Parks Director Adena Long spoke at the grand opening of the David Douglas Community Garden.

It’s the second garden the City and David Douglas High School have partnered on, and the 16th east of 82nd Ave.

The new space will serve as a place for the public to grow healthy foods, educate people about gardening, and build community.

Special thanks to the many partners at both Lan Su and David Douglas.

It’s hot outside and summer is here!

To celebrate, City Council issued a proclamation to celebrate Portland Parks & Recreation’s Summer Free For All and thank sponsors for their generous support of the program.

Summer Free For All provides free, family-friendly activities across all of Portland, all summer long.

There’s something for everyone: special events, movies and concerts, free lunches, open swim and swim lessons, and more.

Summer Free For All is possible thanks to public-private partnerships. Thanks to our title sponsor – Nike’s Made to Play and the nearly 50 civic-minded businesses, organizations, and foundations who stepped up this year to support our community.

The Beginning of Summer – and Thanks Summer Free For All Sponsors!”

Jason Vondersmith in the Portland Tribune

Splash Pads Open in Portland As Temps Hit The 90s

‘Makes A Tough Job Tougher:’ Portland Firefighters, Park Employees Do Their Best to Beat the Heat

Mayor Ted Wheeler: The Blazers Are Part of Portland's DNA

Check the River Water on Your Phone Before Swimming

PBOT Plans to Re-Focus 'Vision Zero' On Far East Side, Where Most Traffic Deaths Occur

Portland Poised to Make it Easier for People with Bad Credit, Criminal Histories to Find a Place to Rent