Today, Council celebrated salmon in the city with a proclamation, a new salmon sanctuary project, an update on the City’s Salmon-Safe practices, and a major award announcement.

The Crystal Springs Watershed Restoration project in SE Portland improved the creek’s water quality and removed culverts so salmon and other fish can travel up the Willamette River tributary.

As a result of the project, Crystal Springs Creek became the city’s first salmon sanctuary in 2017. Led by the Bureau of Environmental Services (BES), the project brought together community groups, government agencies, and indigenous communities to protect threatened salmon and steelhead.

Following the project at Crystal Springs, BES, Portland Parks & Recreation, and the U.S. Army Corps of Engineers completed a restoration project at Oaks Bottom Wildlife Refuge. The project included replacing an old culvert with a “salmon subway” that allows fish to access the Refuge for the first time in over 100 years.

Today, Council approved the next restoration project – Tryon Creek. BES and partners including the U.S. Army Corps of Engineers, Oregon State Parks and Recreation, the Oregon Department of Transportation, and the Portland Bureau of Transportation will remove a culvert that’s blocking fish passage to Tryon Creek, unlocking the watershed to salmon.

Council also received an update on the City’s progress in meeting its Salmon-Safe re-certification.

Portland-based nonprofit Salmon-Safe independently certifies land management practices and their possible effects on water quality and salmon habitat. Portland Parks & Recreation has been certified Salmon-Safe since 2004, the first City bureau to be certified. In 2016, the City of Portland became the first city in the world to achieve certification.

Salmon in Our City Day

The City’s 6th annual Salmon Celebration will be this Sunday, October 6th. Council proclaimed October 6th to be the 2nd annual “Salmon in our City Day” and invites community members to join the celebration at Johnson Creek Park, where Crystal Springs Creek flows into Johnson Creek.

Special thanks to the staff at BES and Parks for their ongoing work, to Salmon-Safe Executive Director Dan Kent, and to Judy Bluehorse Skelton for her steadfast partnership. And thanks to the many government, nonprofit, and community partners who support the City’s salmon restoration work and share our vision for a greener, healthier city.

Portland Named as a Finalist in Global Climate Action Awards

Everton Bailey in The Oregonian

Celebrating Salmon in Our City

Portland Named as A Finalist in Global Climate Action Awards

Portland’s New Plastics Policy is Almost Here. Here’s What You Should Know

What You Need to Know About Portland’s New Plastic Policy

Maxine Bernstein in The Oregonian

Rest Area for Homeless Rallying to Stay Open During Winter

Historic Building in Portland’s Alberta Neighborhood to Be Demolished

Portland’s New Wildwood Trail Pedestrian Bridge Will Open Oct. 27 With All – You – Can – Eat Pancakes

Samantha Kar in the Portland Tribune

Tuesday night, Nick was honored to celebrate outstanding Portlanders at the 2019 Spirit of Portland Awards.

Every year, Nick selects an individual to receive an award. This year, he honored Renee Mitchell. Renee is a longtime community leader, artist, and teacher; a domestic and sexual abuse survivor and advocate; and a social justice champion.

Renee is perhaps best known for her 10 years at The Oregonian, where she was nominated twice for the Pulitzer Prize for her twice-weekly Metro columns. Renee also organized Portland’s first conference of the National Association of Black Journalists.

Today, Renee heads her own company, Renee Mitchell Speaks, where she weaves together her love of writing, performance, and the arts to positively impact our community. She is the also the Founder and Director of Spit/WRITE, a youth writing, performance, and mentoring initiative. She also serves on Portland Parks and Recreation’s Interstate Firehouse Cultural Center Community Advisory Committee.

You can see the complete list of recipients here.

Congratulations to all of last night’s honorees! 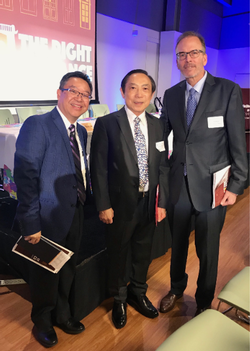 AHSC opened its doors in 1983 in the basement of the Chinese Presbyterian Church. Since then, the non-profit has grown into one of the largest healthcare providers in the Portland area that specializes in culturally-specific care for our Asian and Asian-American communities.

With the support and partnership of OHSU Knight Cancer Institute, the new AHSC Cancer Research and Support Center will expand their care by reaching more people who are battling cancer, with an emphasis on Asian American older adults. This is yet another example of how AHSC serves our community and makes Portland a better place.

Special thanks to the Board Chair Dr. Erik Szeto, CEO Holden Leung, my dear friend Lou Savage, and the entire ASHC family for their dedication and commitment to bettering the community.