Prior to the bridge, many pedestrians were required to cross the busy road at a dangerous curve.

The footbridge is named for Barbara Walker, a long-time parks and trails advocate known for her role in the creation of Governor Tom McCall Waterfront Park and the Springwater Corridor.

Congratulations and special thanks to the Portland Parks Foundation, its Executive Director, Randy Gragg, and board of directors on this successful project!

The Fish Team is Hiring!

Blair Stenvick in the Portland Mercury 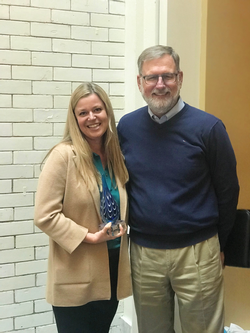 On Monday, Annie Von Burg, Environmental Policy Manager at the Bureau of Environmental Services, was awarded the first annual Betsy Ames Leadership Award by the City of Portland.

The award was created in honor of Betsy Ames, a dear friend, longtime City employee, and former Chief of Staff to Commissioner Fish.

Betsy was known for her ability to find pragmatic and creative solutions to difficult problems. She helped guide challenging debates to effective compromises, and provided mentoring and support to anyone who asked for help.

Annie Von Burg oversees the City of Portland’s efforts to clean up the Willamette River. She passionately and effectively works with a wide variety of public and private stakeholders involved with the $1 billion cleanup. She is a highly respected leader and a mentor to many coworkers.

Voters overwhelmingly approved the Parks Replacement Bond in 2014, which dedicated up to $68 million in repairs and improvements to some of the most critical needs in the Portland Parks & Recreation (PP&R) system.

“The bond has been a big success,” says Parks Commissioner Nick Fish. “This year’s report demonstrates strong performance, accountability, and opportunity. Thanks to the voters for saying ‘yes’ to fixing our parks, to my colleague Commissioner Amanda Fritz for her leadership in championing the measure, and to the PP&R team for delivering great results.”

“The Fix Our Parks bond measure funded needed repairs in parks all over Portland,” says former Parks Commissioner Amanda Fritz. “I am grateful to the voters for recognizing that we must take care of aging infrastructure in our treasured neighborhood gathering places, and to Parks staff who have made wise use of every penny allocated in the program.”

Performance – Thirty-four projects are complete. The final eighteen are underway, with five ahead of schedule. All 52 projects will be completed within the overall bond budget of $68 million.

Accountability – An independent auditor, Harvey M. Rose Associates, completed a performance audit in January 2019. The findings confirmed that funds are being spent according to the promises made to voters, that program managers are financially responsible, and that bond dollars are clearly and accurately tracked. A second audit will be completed at the conclusion of the bond work.

Opportunity – Parks is committed to contracting equity. The City has a target of 20% disadvantaged, minority-owned, women-owned, and emerging small business (D/M/W/ESB) contractor utilization. Parks has exceeded those goals with 31% of professional and technical contracts (like engineering and landscape design) and 41% of construction contracts being awarded to D/M/W/ESB firms.

“It is immensely gratifying to see the bond projects being completed and enhancing neighborhoods throughout the City,” says PP&R Director Adena Long. “And it’s important to note that PP&R works extensively to engage the public in large-scale bond projects. This helps us reflect our increasingly diverse community’s needs and desires in projects.”

Here are several photos of bond-funded projects and the Year 4 Report Executive Summary. The full report can be viewed on the Parks website here.

Following a series of internal promotions, we have a vacancy in our Communications Coordinator position and are looking for a new staff person to join our team.

The Communications Coordinator helps manage the Commissioner’s public inbox, ensuring that we provide timely and thoughtful responses to questions, concerns, and suggestions from community members.

This person will also be working closely with Commissioner Fish on a variety of other communications including talking points, web stories, tweets, and newsletters.

Public service is equal parts challenging and gratifying, and we are excited to welcome a new person to the office and to our team.