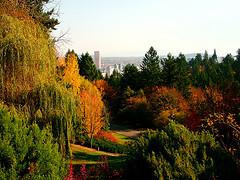 Joined by civic leader Gordon Sondland, the CEO of Hotel deLuxe and Hotel Lucia and co-principal of the Sondland Durant Foundation, and a host of contributors, Parks Commissioner Nick Fish announced this morning that the challenge match to raise $50,000 and save the Washington Park Summer Festival had been successful.

"We've had an extraordinary response," Commissioner Fish said. "The support from these businesses and individuals demonstrates how important saving this much-loved Portland tradition is for our community, especially in these tough times. This is an example of what the best kind of private/public partnerships can achieve."

Read the full press release in our 'News' section.