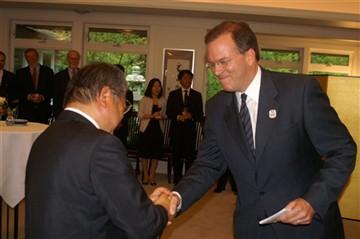 2009 marks the 50th anniversary of Portland's sister-city relationship with the city of Sapporo, Japan. Several activities marked the occasion: an official recognition ceremony in Council chambers at City Hall on Friday afternoon was followed by a reception in the City Hall Atrium; a Friday evening Dinner & Reception was hosted by the interim Consul General of Japan, Mr. Murabayashi; and members of the official delegation from Sapporo marched in the 2009 Grand Floral Parade on Saturday, June 6.

Nick was honored to be participate in these special events and to be a part of the unique bond between Sapporo and Portland.

Thanks to Charles King for the photo!