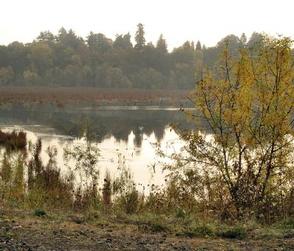 Last Saturday, June 13, a group of volunteers gathered for a paddle up the Willamette to the 45-acre parcel of Ross Island donated in 2007 by Robert Pamplin Jr., owner of Ross Island Sand and Gravel. Part of an internationally recognized bird habitat, Ross Island also hosts a number of invasive species, the most pernicious of which is garlic mustard. The group removed numerous bags of the plant, which spreads rapidly and can inhibit the growth of other plants, during the inaugural work party in the area. It will take years to fully restore the native habitat of this, one of Portland's newest natural areas.

Friends of Ross Island will host three more Saturday outings to remove invasive species and litter: July 11, August 8, and September 12. Boats depart from the Portland Boathouse at 9:00 and return around noon.

For more information, or to register, contact Marissa Dorais in the City's Bureau of Environmental Services at marissa.dorais@bes.ci.portland.or.us or by phone at 503-823-7016.