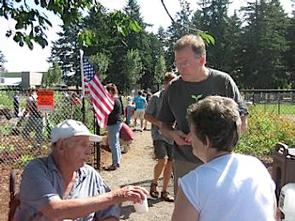 Volunteers arrived from as far as Monmouth Saturday morning at the Earl Boyles Community Garden in SE Portland to donate their time to repair the garden, damaged earlier in the month by vandalism. Close to 100 people gave their time in a show of support for the garden, which has been vandalized several times this season.

Volunteers donated plant starts, pulled weeds, and cleaned up the many plants damaged beyond repair by the vandalism. Each time the garden has been vandalized, community members - gardeners and non-gardeners alike - have stepped up to restore the land.

In addition to giving their time, many of the volunteers arrived with fresh vegetables to donate to those who had lost their harvest. Extra produce was given to a local food bank.

"We're going to take steps to make sure this never happens again," the Commissioner told volunteers.

Expanding and promoting Portland's Community Gardens program is one of the Commissioner's top priorities. For more about how you can be involved with a garden, visit the Parks Bureau's website - portlandonline.com/parks.

See more pictures of this event in our Photo Gallery!