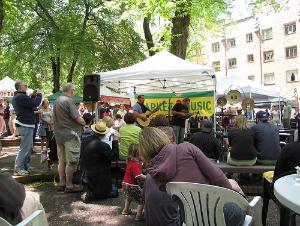 Portland's farmers markets - ranked first in the world earlier this month - had a near miss recently.

Fortunately, after meeting with Commissioner Fish, and thanks to the work of Multnomah County Chair Ted Wheeler, the Assessor withdrew the tax bill.

Thanks to Flickr user Photos by Mavis for this shot from the South Park Blocks market!