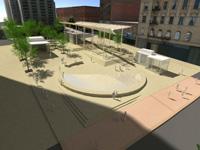 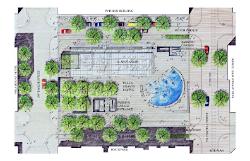 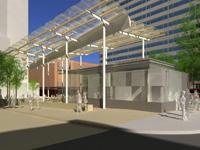 In 1997, local developer Tom Moyer purchased a block of property at Southwest Park and Taylor, intending to build a below-ground parking structure and donate the surface to to the City for a park.

Plans were finalized in Winter 2008 following extensive community input, and the park will open this Fall.

Almost one-third of the project's nearly $10 million total budget is private donations from Moyer and Portlander Jordan Schnitzer - this estimate doesn't include the land donated by Moyer, which is valued at $5 million.

The park also includes a central fountain. When the project budget couldn't cover construction of the fountain, Schnitzer donated almost $400,000 and asked the City to name the fountain to honor Portland's teachers. The result - Teachers Fountain - is a major feature of the park.

Chet Orloff, chair of the park's citizens advisory committee, told Jim Redden in the October 8 Tribune, "this is a really classic example of the kind of public-private partnerships we boast about here in Portland."