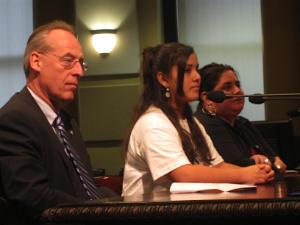 PSU President Wim Weivel spoke in support of the Resolution. Also testifying was Rebecca Shine, Producer of the recently-released documentary "Papers," which explores the plight of undocumented young people in America unable to continue their education after high school.

The DREAM Act, a bipartisan effort 10 years in the making, addresses the 2 million young people currently living in the United States without legal status who are unable to attend college or find jobs. The Act provides students a path to citizenship conditioned on ademic success or a commitment to serve in our armed forces.

Portland-area students will have the opportunity to graduate from high school with the knowledge that they will be welcomed by our institutions of higher learning and given full opportunity to reach their highest potential.