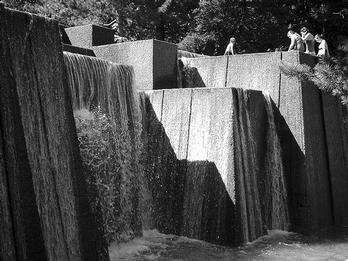 What do Ira Keller Fountain, Lovejoy Fountain, Pettygrove Park, Source Fountain, and downtown's original transit mall have in common? They were all designed by world-renowned landscape architect Lawrene Halprin, who passed away on Sunday at the age of 93.

In addition to his landscape design work for the City, Halprin was also instrumental in shaping our region's land use policies, writes Steven Ames in the November 2 Oregonian. In the 1970s, Lawrence Halprin and Associates was commissioned by Oregon Governor Tom McCall to imagine the future of Willamette Valley as it faced a new wave of growth and development. The end product of that study was a landmark examination of urban sprawl, environmental protection, and principles of livability.

Portlanders have celebrated the work of Lawrence Halprin in a variety of ways. The Halprin Landscape Conservancy, founded by Portland architects Steve Koch and Marcy McInelly in 2001, works to maintain Halprin's spaces while increasing awareness of parks as "a cultural resource on par with museums."

Randy Gragg, Editor-in-Chief of Portland Monthly, along with Janice Ross and John Beardsley, will publish an exploration of Halprin's work in "Where the Revolution Began: Lawrence and Anna Halprin and the Reinvention of Public Space."

At the dedication of the Ira Keller fountain nearly 40 years ago, Halprin said "I hope this will help us live together as a community, both here and all over this planet Earth."

Those words are as true today as they were then.

Thanks to Flickr user anne.oeldorfhirsch for the photo of Ira Keller fountain.