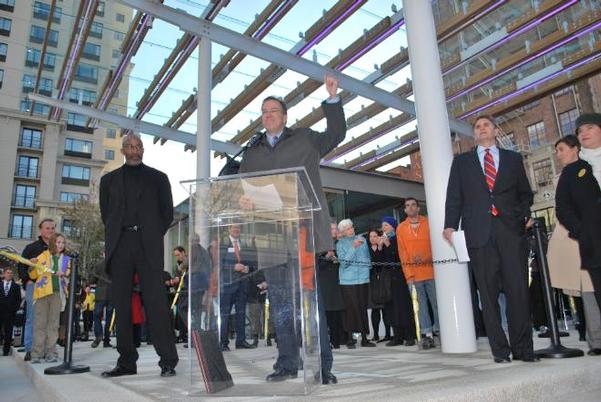 Over ten years ago, Mayor Vera Katz envisioned a downtown district that connected the North and South Park Blocks and complemented Pioneer Courthouse Square. Yesterday, Nick cut the ribbon on Director Park, which achieves that vision and more.

Director Park is a model of public-private partnerships, led by an all-star team of architects, designers, City employees, and private donors. Portlanders Tom Moyer and Jordan Schnitzer together donated millions to the project, not to mention the land the park was built on; the Zimmer Gunsul Frasca architectural firm designed the space; Zari Santner and her Parks Bureau employees managed the project; a Citizens Advisory Committee ensured that the park will serve Porlanders for generations; and the Portland Development Commission provided financing and support in this downtown revitalization project.

The Director Park 'piazza' offers movable furniture, Violetta restaurant, an on-site park attendant, a host of programmed events, Teachers Fountain, and simple space for relaxing with friends and loved ones.

Visiting Portland more than 100 years ago, John Olmsted wrote, "It is becoming more clearly realized that every inhabitant owes to his or her city certain duties. Among them is that of making the city more beautiful to live and work in. And while there are many things which may contribute to the beauty of a great city, one of the greatest is a comprehensive system of parks and parkways."

With Director Park, we celebrate an extraordinary new addition to Portland's system of parks.

Thanks to Bryan Aptekar of the Parks Bureau for the photos!