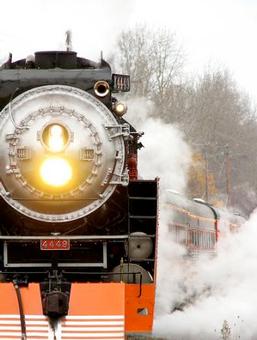 City Council voted Wednesday to approve the Oregon Rail Heritage Foundation's (ORHF) plan to purchase land in the OMSI district along the east bank of the Willamette River for construction of a new facility.

The facility will provide a space for ORHF to restore and house the three historic steam locomotives it owns - the Spokane, Portland & Seattle 700; the Southern Pacific 4449; and the Oregon Railway & Navigation 197 - and which are currently under the stewardship of the Parks Bureau.

ORHF Founding President Laurel Lyon, President Doyle McCormack, and Board members Ed Immel, Phil Selinger, and John Frazee have been instrumental in ORHF's work to maintain these trains and to raise the profile of Oregon's rail heritage.

The trains are now at the Brooklyn Roundhouse, just north of Union Station in downtown Portland. Before arriving there in 1974, the trains spent 16 years in Oaks Park after being given to the City in 1958.

The new facility, part of a comprehensive plan for the OMSI district property which includes educational, retail, and tourist facilities, will also offer the general public access to the trains for the first time.

Thanks to flickr user Noel Zia Lee for the great shot of the Holiday Express!