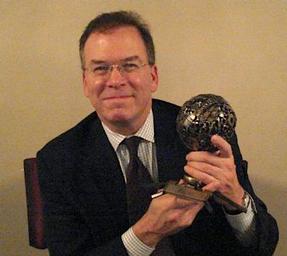 Nick was honored with a SCRAPPY for his work on reuse at last night's SCRAP Awards, held at The Nines in downtown Portland.

The evening, themed 'Incognito,' featured performances from the Transcendental Brass Band, a "Junk to Funk" fashion show, and both silent and live auctions.

Nick shared the "2009 Reuse Visionaries" award with County Commissioner Jeff Cogen. The two were honored for their work on ReUse Week 2009, a event earlier this year designed to draw attention to the wide variety of reuse organizations in Portland.

Nick and Jeff gave a lively acceptance speech, promising that ReUse Week 2010 would be bigger and better than ReUse Week 2009.

Special thanks are due to Debbie Caselton, outstanding City employee, leader in the Diverse Empowered Employees of Portland (DEEP), and SCRAP Board Secretary, who helped arrange the evening!

Check our 'Photo Gallery' for more photos of the festivities!