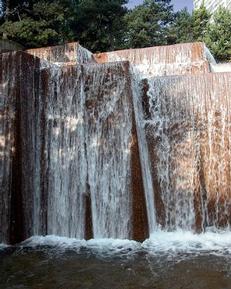 Saturday afternoon, Nick spoke at a celebration featuring the release of Randy Gragg's book "Where the Revolution Began: Lawrence and Anna Halprin and the Reinvention of Public Space" Ziba headquarters in downtown Portland. All proceeds from the book will benefit The Halprin Land Conservancy, a Portland nonprofit founded to preserve Halprin's legacy, writes D.K. Row in the Saturday Oregonian. (See this article on portland.readinglocal.com for more about Saturday's event.)

Inspired by the natural environment and by his wife Anna's choreography, Lawrence Halprin taught us that public spaces can be beautiful, joyful, and lyrical. His work was transformational - Halprin's plazas are arguably the most influential works of architecture ever built in Portland. As the first Modern-era urban plazas to fully synthesize urban design and sculpture into a seamless whole, they changed the course of landscape history.

Nick is honored to be a part of this celebration of the life and work of Lawrence Halprin, and to announce a strategic partnership between the City of Portland and the Halprin Landscape Conservancy to restore and maintain the plazas. The first step of the partnership is a City-led effort to designate the Halprin Open Space Sequence a National Historic Landmark. That designation will protect and honor Halprin's plazas and fountains for generations to come.

Thanks to flickr user Joseph Readdy for the great shot of Halprin's fountain across from Keller Auditorium in downtown Portland.