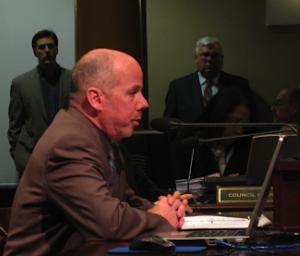 Last week, Portland non-profit Central City Concern (CCC) was announced as the awardee of an $8.9M federal grant from the American Recovery and Reinvestment Act (ARRA). The funding will support the construction of a permanent home for integrated behavioral health services at the corner of Broadway and West Burnside.

Council recognized Executive Director Ed Blackburn Wednesday morning for the tremendous work of CCC in securing this grant - fewer than one in six applicants received a grant. CCC is the only Oregon recipient and the only community health center in the Northwest to receive grant funding.

Said Congressman David Wu, "It is a testament to Central City Concern's excellent and critically important work that it has been given the opportunity to expand its footprint in our downtown."

The new center will allow CCC to serve an additional 1,350 patients per year, and construction of the center will create more than 100 jobs in the Portland area.

Congratulations to Ed and the entire team and Central City Concern whose hard work made this possible.