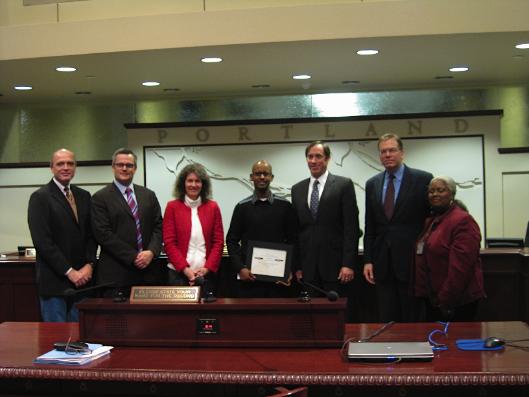 Nick was honored to present Kayse Jama, Executive Director of the Center for Intercultural Organizing (CIO), with the 18th Annual Steve Lowenstein Trust Award in Wednesday's Council session. The award is presented yearly to "that person who demonstrated the greatest contribution to assisting the poor and underprivileged in the City of Portland, Oregon." Through CIO, Kayse embodies this spirit of servant leadership.

CIO helps historically underrepresented communities engage with civic life in a variety of ways - with an on-site immigrant- and refugee-led media production studio; by advocating for change in our State legislature; by connecting folks to City services; and by facilitating a stronger relationship between Portland Public Schools and the English language learners it serves.

In tough economic times, it is especially gratifying to offer this award to someone who, in turn, supports our very vulnerable citizens.

Thanks you, Kayse, for your tremendous work in the service of the people of Portland.