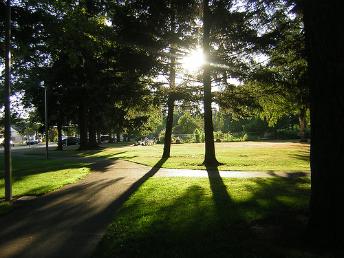 Last year, Nick supported a community effort to save Lents Park, a 38-acre jewel in the heart of outer SE Portland's Lents neighborhood, from being turned into a baseball stadium. Following that effort, he announced funding to create a Master Plan for Lents Park, a park which hasn't been evaluated in nearly 30 years.

Now, the process of creating a Master Plan is underway. Last week, the Parks Bureau put out a request for proposals for a consultant to create the plan, and in this morning's Daily Journal of Commerce, author Justin Carinci reports on conversations he's had with a number of Lents residents.

While the park continues to be popular for Little League and other sports events, many neighborhood residents want to see a more family-friendly park, with a larger play area and more benches and tables to gather around.

Nick Christensen, vice chairman of the Lents Neighborhood Association, appreciates that the baseball debate elevated the profile of Lents Park, telling Carinci that the discussion did "a good job of keeping a high profile of Lents as a great neighborhood."

Thanks to flickr user desikfor the photo of Lents park!