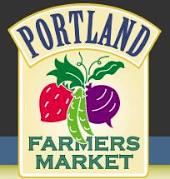 The Portland Metro area is home to more than 30 farmers markets, and at least two more at planned to debut this Spring, writes Karen Brooks in the February 1 Oregonian.

Portland Farmers Market, (PFM), nearly 20 years old, enjoys a collaborative, successful relationship with the Parks Bureau, and operates a collection of farmers markets in Portland which together serve some 20,000 shoppers per week.

This year, those shoppers will have more to choose from, as PFM opens a Monday market in Pioneer Courthouse Square and a new market at NW 23rd and Savier. The South Park Blocks market will also expand, nearly doubling in size when the season opens in late March.