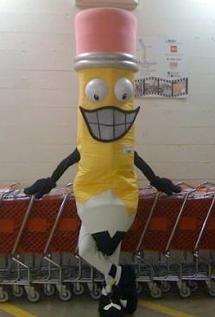 Nick is excited to be a contestant in tonight's 10th Annual Wells Fargo Celebrity Spelling Bee, presented by Comcast, held in the Grand Ballroom of the Portland Art Museum. Emcee John Erickson, from K103fm, will lead judges Susan Castillo, Superintendent of Oregon Public Schools, and Donna DuBois, 2009-2010 Oregon Teacher of the Year.

The silent auction, dinner, spelling bee, and reception will benefit Schoolhouse Supplies, which has distributed more than $11 million in free school supplies to local classrooms in the last 10 years. Founded in 1999, Schoolhouse Supplies is Oregon's first and only volunteer-run Free Store, providing teachers with the classroom supplies they need.

Nick partnered with the local non-profit last summer for ReUse Week 2009, a City-County effort to highlight reuse organizations around Portland - and a friendly competition to see whether City or County staff would donate the most supplies. We're not saying who won!

UPDATE: Nick had a lot of fun at the spelling bee. He survived the first few rounds but eventually stumbled on umlaut. The event raised over $185,000 for Schoolhouse Supplies - congratulations on a great event, and congratulations to winner Pat Janowski of Live Wire! Radio!