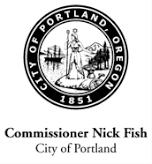 I wish to express my deep regret over the death of Aaron Campbell. This young man should not have died. As the parent of two children, I cannot imagine the anguish and sense of loss experienced by his family.

I fully support the announced plans of Commissioner Dan Saltzman and Chief Rosie Sizer to conduct a thorough, timely, and completely transparent investigation of this tragedy. I endorse making their findings and recommendations available to the public immediately.

I also support the ongoing efforts to strengthen civilian oversight of the Police Bureau, and to make it more independent.

The Grand Jury, in its February 10 letter to District Attorney Mike Schrunk, identified serious flaws in police procedures and policies, which led to Aaron Campbell’s death. This is unacceptable to me.

The Police Bureau must take immediate action to address issues of training, command and control and communication.

And, the bureau must work to strengthen community policing, which, at its heart, is a partnership between the community and police officers.

Now is not the time to point fingers or assign blame. Instead, we should come together for reconciliation and understanding.

We cannot reverse this tragedy. But we can honor Mr. Campbell’s life by re-committing to work across racial and ethnic lines for real, lasting change.