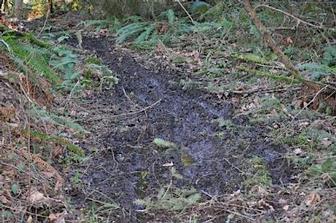 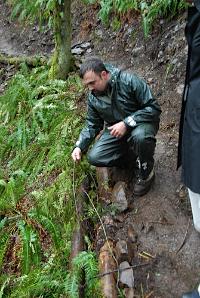 Earlier this month, an illegal off-road bike trail almost a mile long was discovered in one of the most remote areas of 5,000-acre Forest Park in Northwest Portland. Parks officials put the trail at between one and two months old, and estimate that it will take more than $10,000 and many years to fully restore the forest.

Commissioner Fish describes the damage done to one of Forest Park's most ecologically fragile areas as completely unacceptable. "It's outrageous, actually," he told Janie Har in the February 24 Oregonian. "This is nothing less than vandalism of our natural areas, and it will not be tolerated."

The Commissioner is currently working with a diverse citizen committee to address the lack of off-road biking opportunities for Portland cyclists. The committee is looking for ways to meet the demand for off-road trails in a way that's both safe and legal, and not at the expense of our critical wildlife habitat. Illegal activity like this undermines this process and makes it more difficult to reach solutions.

Surveying the damage with OPB's Rob Manning, Deshler described the impact the trail would have on area wildlife, reporting that elk are known to live in the area but carefully avoid signs of human activity, writes Manning for OPB today.

Local partners have stepped up to address the situation - NW Trail Alliance, for example, has put signs up at the site, and on their blog asks riders to "Please abstain from unauthorized trail building, riding on trails that are off-limits to bikes."

"I'm hopeful that we will come together to educate park users about the importance of wildlife habitat, and that something good will come out of this misfortune; that we will create more stewards of the park who won't stand for this destruction," Commissioner Fish says.

Commissioner Fish sent a letter today to the Forest Park Single-Track Cycling Committee addressing this act of vandalism. Click here for text of the letter.

News channel KATU was on the scene February 23: